The tallest statue of Japan is in the Ibaraki prefecture. The Daibutsu of Ushiku is in a remote location which is accessible in an hour and a half from Tokyo.

The Daibutsu of Ushiku is one of the main monuments of the Ibaraki prefecture. This giant statue of Buddha is as unknown as the area that houses it, even for the Japanese. This is paradoxical since this structure was the largest statue in the world from 1993 to 2002. Nothing less! 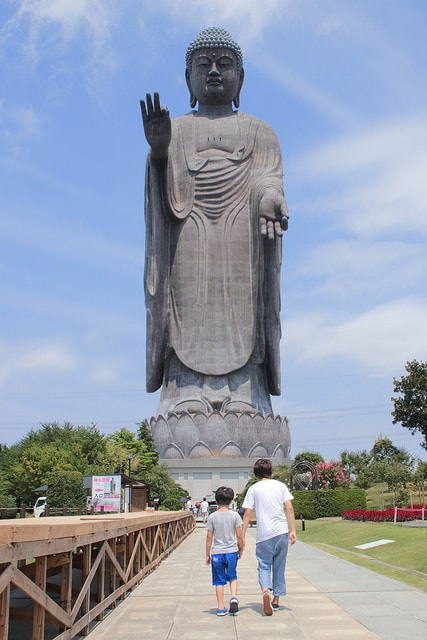 This monument was built in honor of Shinran‘s birth, the founder of the Jodo Shinshu Buddhist sect. The place of its edification was not chosen by chance, since it is in Ushiku that the monk Dharmakara became Buddha Amitabha by attaining enlightenment. Don’t try to understand that paragraph if you are not into Buddhism.

To be more precise, Ushiku Daibutsu is in Ushiku Arcadia Park. There, you can admire beautiful floral arrangements in the spring. But it is especially the interior of the statue that will keep your attention during most of your visit. Indeed, the giant Buddha hosts a museum including a circular room in which are exposed 3000 copies of the Daibutsu. You will also find pictures of the construction process, and a real size replica of a statue toe, which shows how impressive the structure is.

On the top floor you can also enjoy the view at 80 meters, thanks to the windows on the torso and the back of the statue. Just make sure to come on a sunny day, otherwise you will not see much (like me). Of course, all this is accessible through an elevator. You will not have to climb hundreds of steps to enjoy this show.

What is the size of the largest Buddha statue in Japan?

The statue of Ushiku Daibutsu is 100 meters high, and rests on a base of 10 meters. It is more than the Statue of Liberty in New York City, which measures only 46 meters, but cheats a lot with its base of 47 meters.

Even if few Tokyoites know it, the giant Buddha of Ushiku can be seen from the roofs of Tokyo, while it is about sixty kilometers from the city.

In addition, its 4,000 tons of brown copper should change color during this century to turn green. This phenomenon is due to the oxidation of this material. It is also found on other statues, such as the famous lady of New York.

What I thought of Ushiku Daibutsu

The Buddha statue of Ushiku is undeniably impressive. However, I do not think it is worth a detour. The visit of the Daibutsu will only last a few minutes and there are not really any other points of interest in the area. Apart from the Kamiya Castle, which is not the most exciting tourist attraction in Japan. Also, the place is not easy to access if you do not have a car.

To this is added an entrance ticket which is at an exorbitant price of 700 to 800 yen. In my opinion, it is much too expensive when you know that the visit of the Ushiku Daibutsu and its park can last less than an hour.

I only recommend this visit to the people who pass in the area to connect Tokyo to the Tohoku. Otherwise, I would recommend many other excursions much closer to the Japanese capital city.

How to get to Ushiku, Ibaraki Prefecture

Two options are available for you to go to the Ushiku’s Buddha statue.

The first solution is to take public transport. You can travel by train to Ushiku station from Ueno station in Tokyo. The journey on the JR Joban line lasts 43 minutes. Once at Ushiku station, you will have to take a bus that will take you to the Ushiku-joen stop in 34 minutes. As you can see, the nearest station to this giant statue is not a stone’s throw away.

The other option is to get there by the Ken-o highway with a rental car, unless you have a nice Japanese friend who has his driver’s license. This is not easy to find. Anyway, the statue is about 3 kilometers from the Ami-Higashi exit. You will have to drive about an hour from Tokyo to arrive at the feet of the Buddha.

The weather conditions were unfavorable (to remain polite) the day of my visit, I used photos under the Creative Commons license shot by toyohara and saname777.