The Tokyo Trick Art Museum is an area in which you can take crazy pictures with optical illusions. This museum located in a shopping center of the artificial island of Odaiba in Tokyo is a goldmine for those who want to return from Japan with insane souvenir photos.

Few days ago, we wandered aimlessly in the numerous shopping centers of Odaiba artificial island with my buddy Juan. We had fun in vintage arcade centers and theme shops of this neighbourhood in the Minato ward until we stumbled upon a museum with a strange name: Tokyo Trick Art Museum.

The storefront of this place does not necessarily let glimpse of what was hidden there. So we rushed to buy our tickets to satisfy our curiosity, and it was a real discovery! We were in a museum that offers visitors to take photos in its artworks mainly composed of murals. You can create true optical illusions with them! Each composition of this museum puts you in outlandish situations that will remain in the annals of your holiday photos.

The museum is divided into five parts, each with its own universe. Two of them are focused on Japanese culture, which is perfect for making souvenir photos.

Once you enter the museum, you are transported back in time and return to feudal Japan with a huge area offering murals on the theme of the Edo era. A staff member welcomes you and explains how to take pictures with all funs museum’s background elements. All in proper English, which is great!

After this brief that allowed us to understand the extent of the possibilities available to us, we set out in search of new Facebook profile pictures. 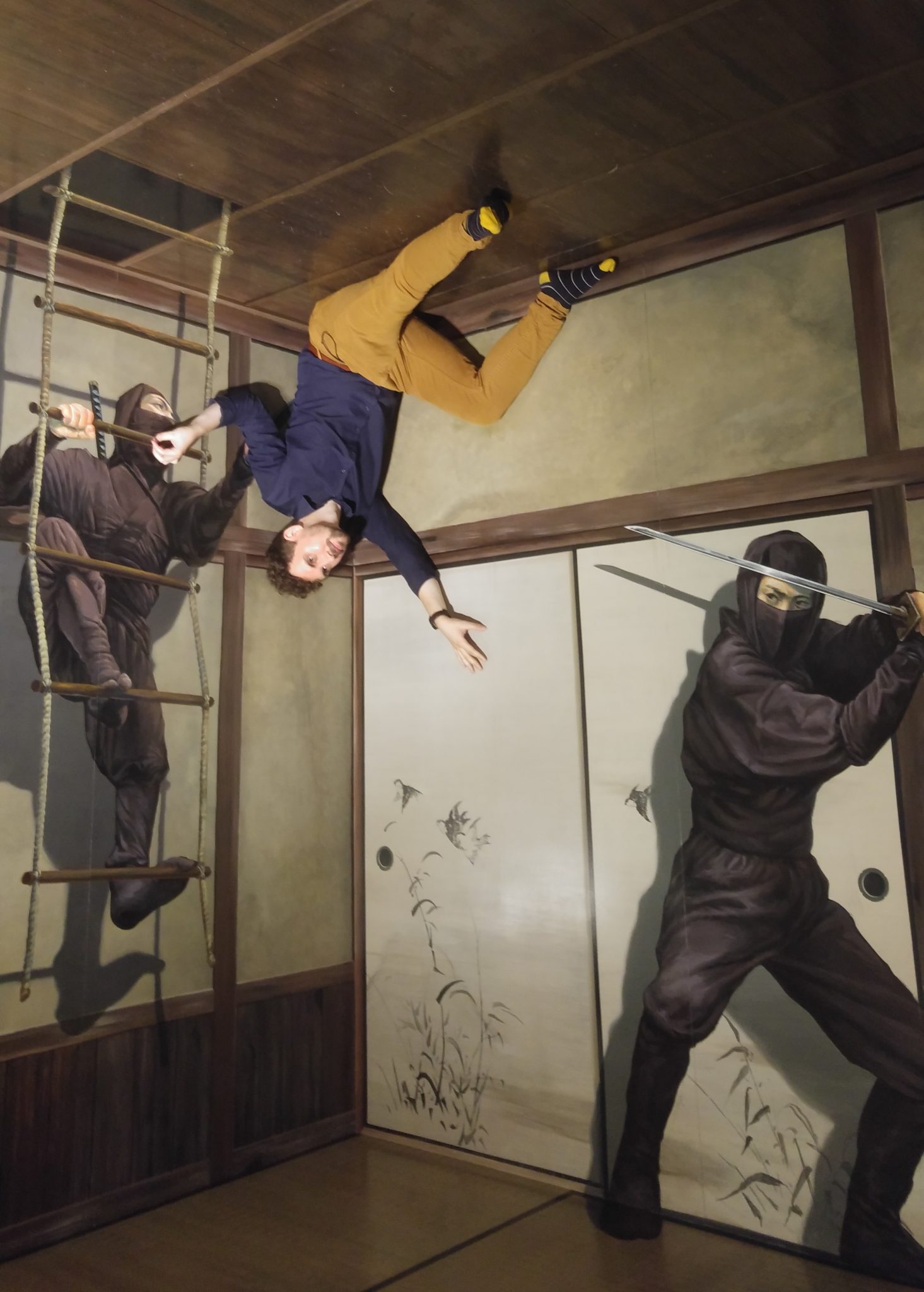 I understood how to become a ninja in only five minutes. 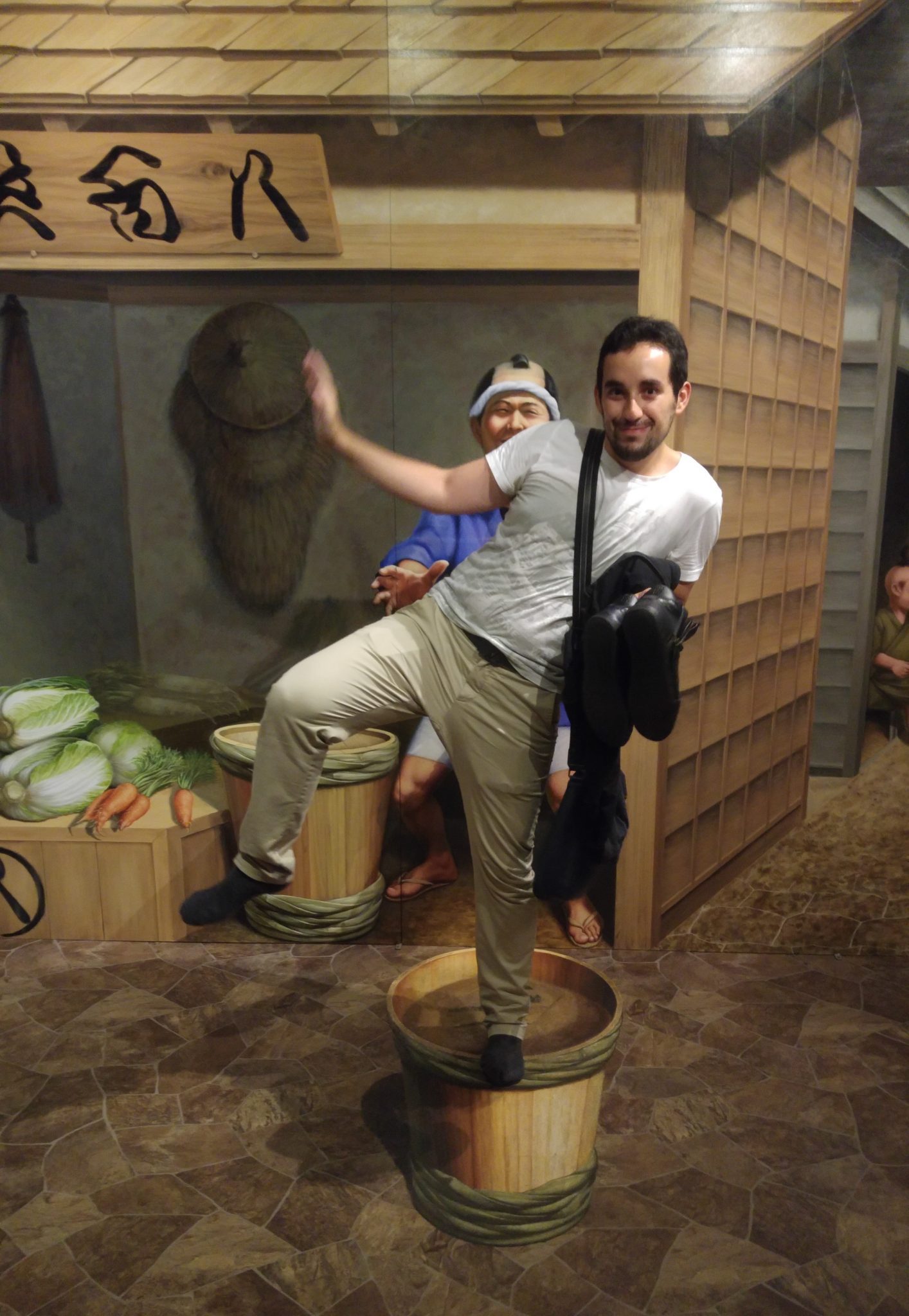 Meanwhile Juan was playing without reason on a bucket. This guy has full confidence in his arch, what a man!

Beware though, some images require a lot of patience to be successful. Like the one below, where I’m supposed to be carried down by two kappas, when I should rather worry about my broken head. 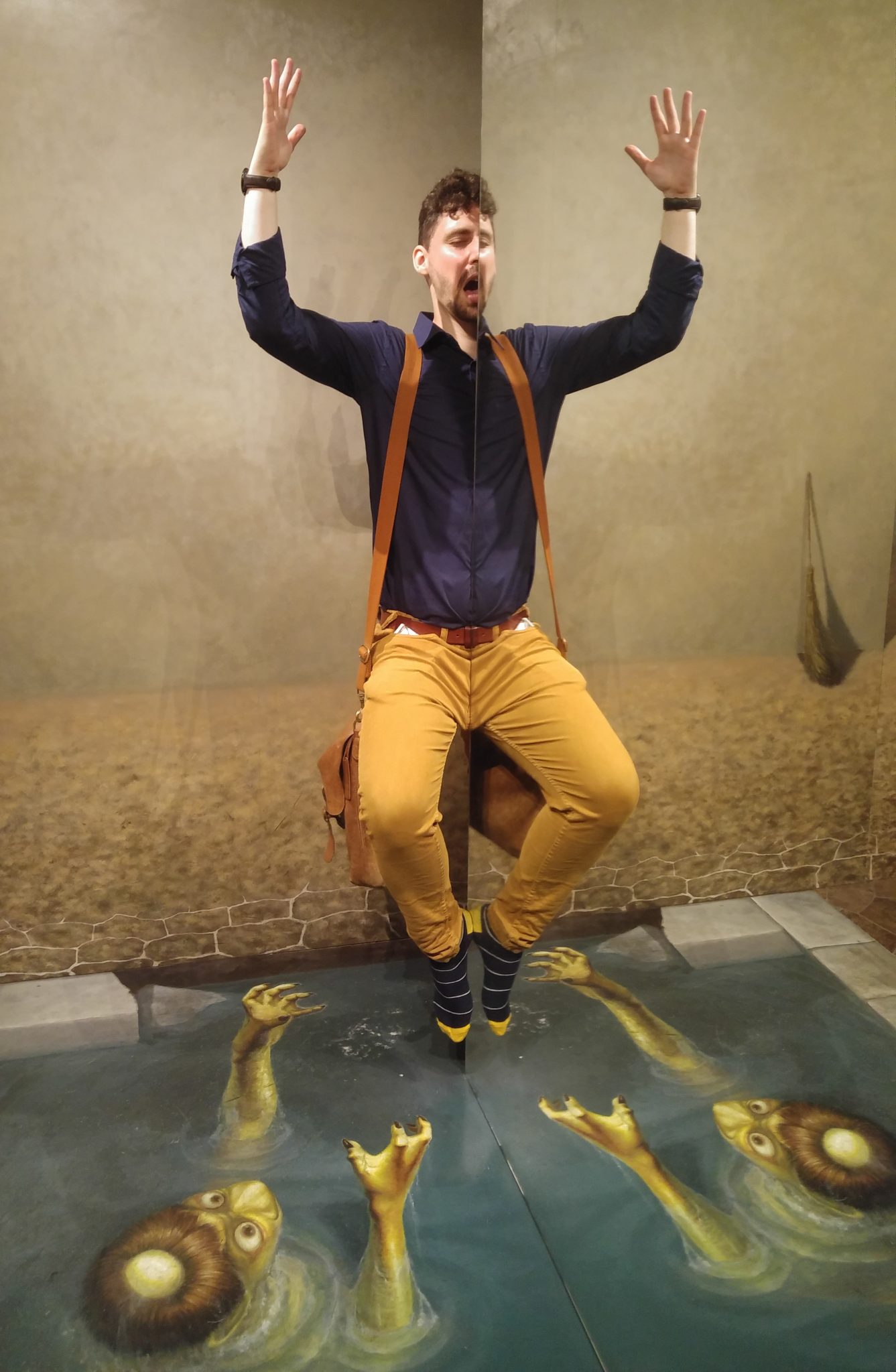 The hostess that greeted us at the beginning of the tour had indicated that two secret doors were hidden in the path of the Tokyo Art Museum Trick. We were therefore challenged to find them and make original photos, just to get the material to seem clever during dinner parties … Except that these doors were far from being not found, as they are part of the route to follow to get out of the museum. What a disappointment!

But we soon forgot our worries when we found ourselves faced with monsters from Japanese folklore: we had entered the Tokyo Trick Art Museum space on the theme of the haunted house. Both say that we have leveraged our prodigious theatrical skills. 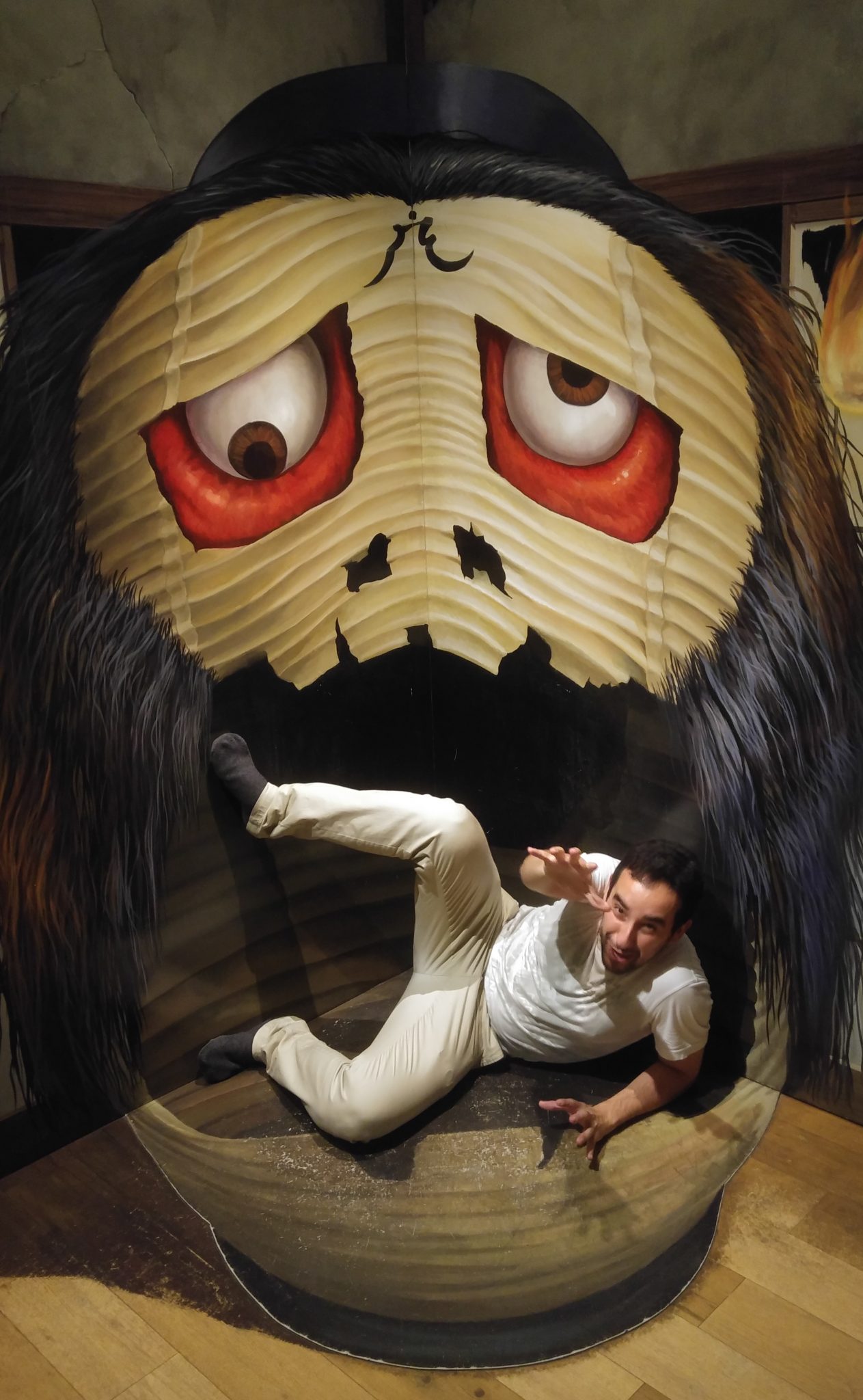 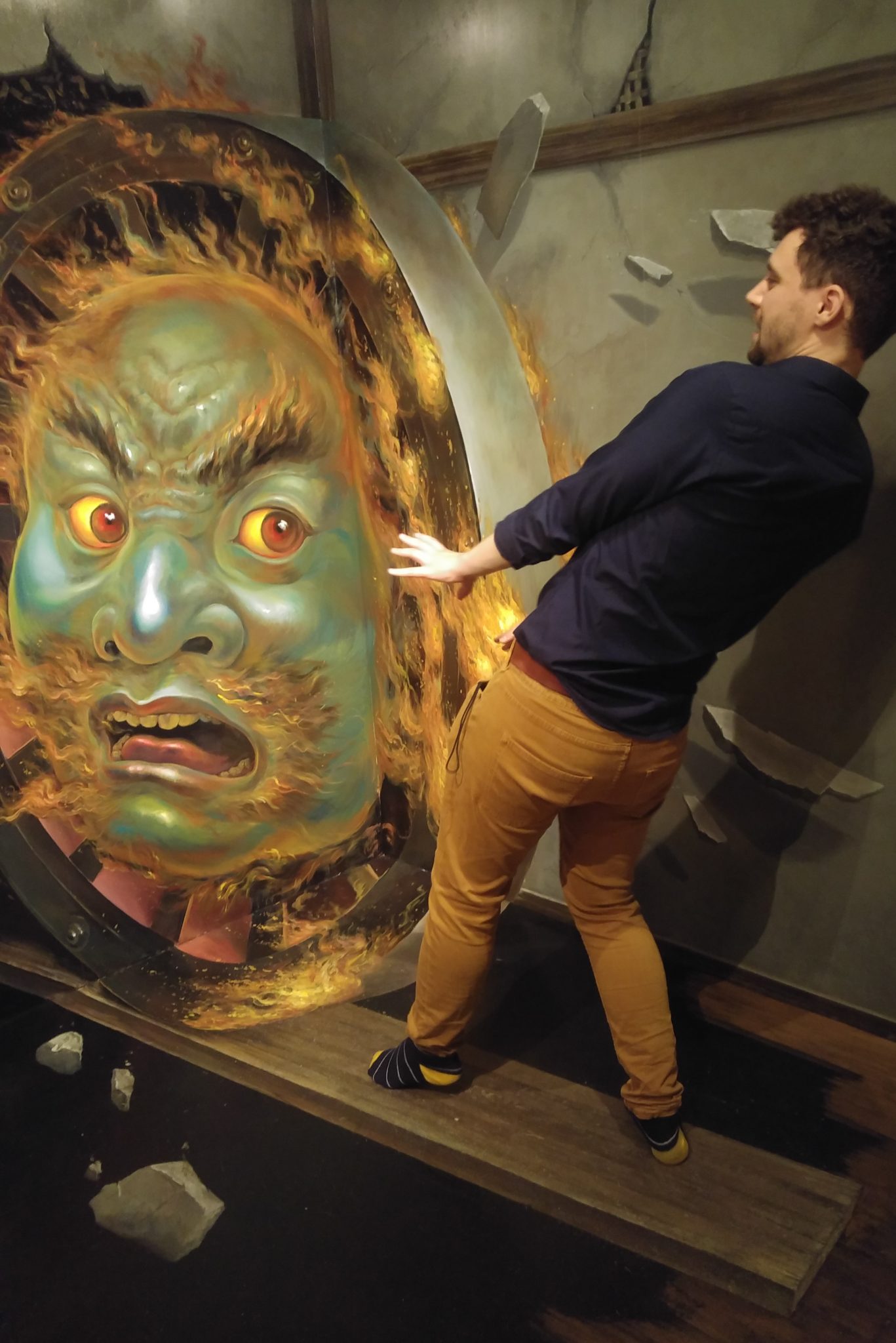 Japan has an unfriendly folklore.

After a second “stealth” door we have ended up in the carryall space of Tokyo Trick Art Museum: Art Gallery. I say “carryall”, because actually there are a few pictures there, as in the photo below … 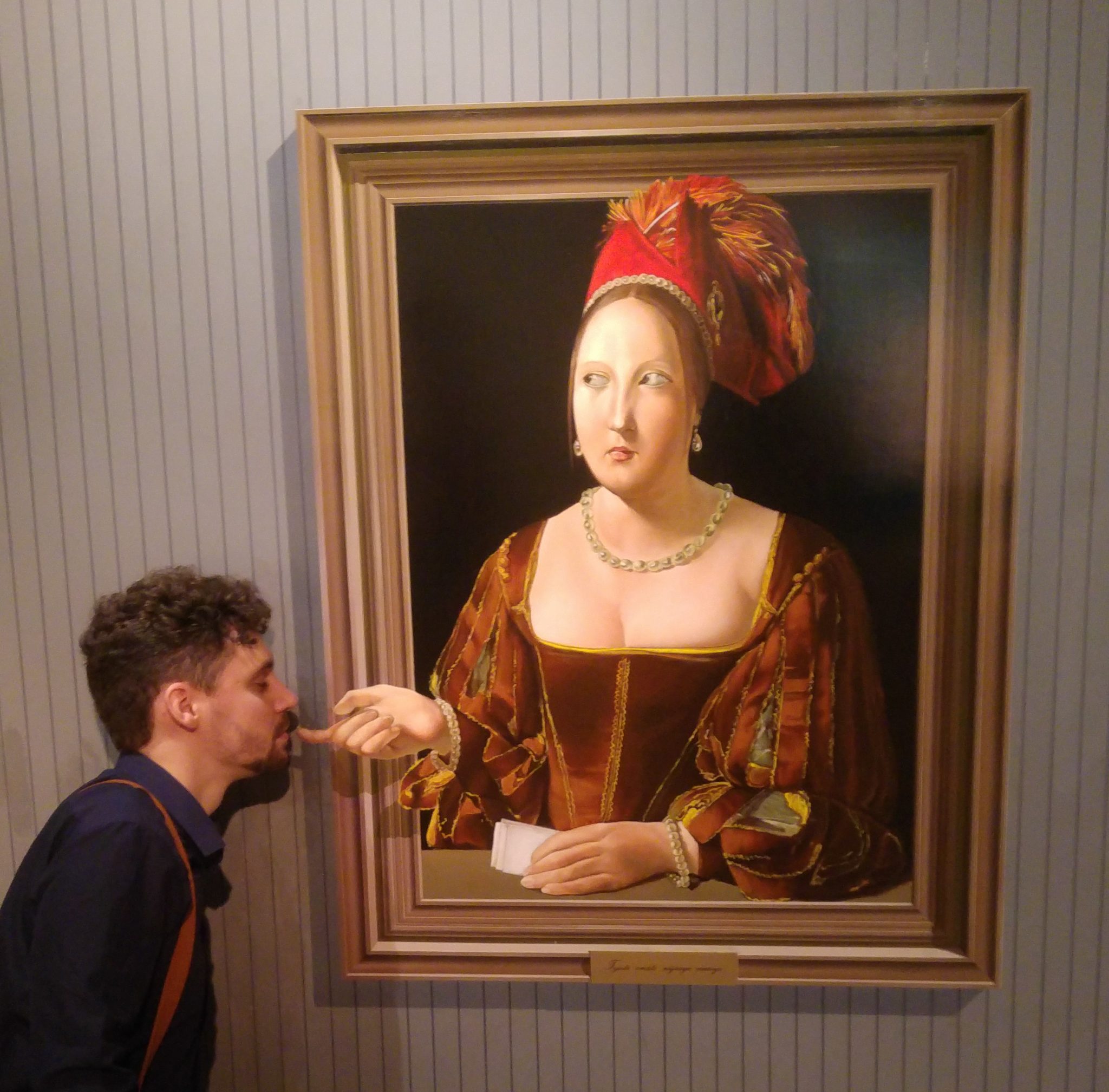 But there are also things which are found rarely in art galleries, like a hungry shark or a psychopath vampire. 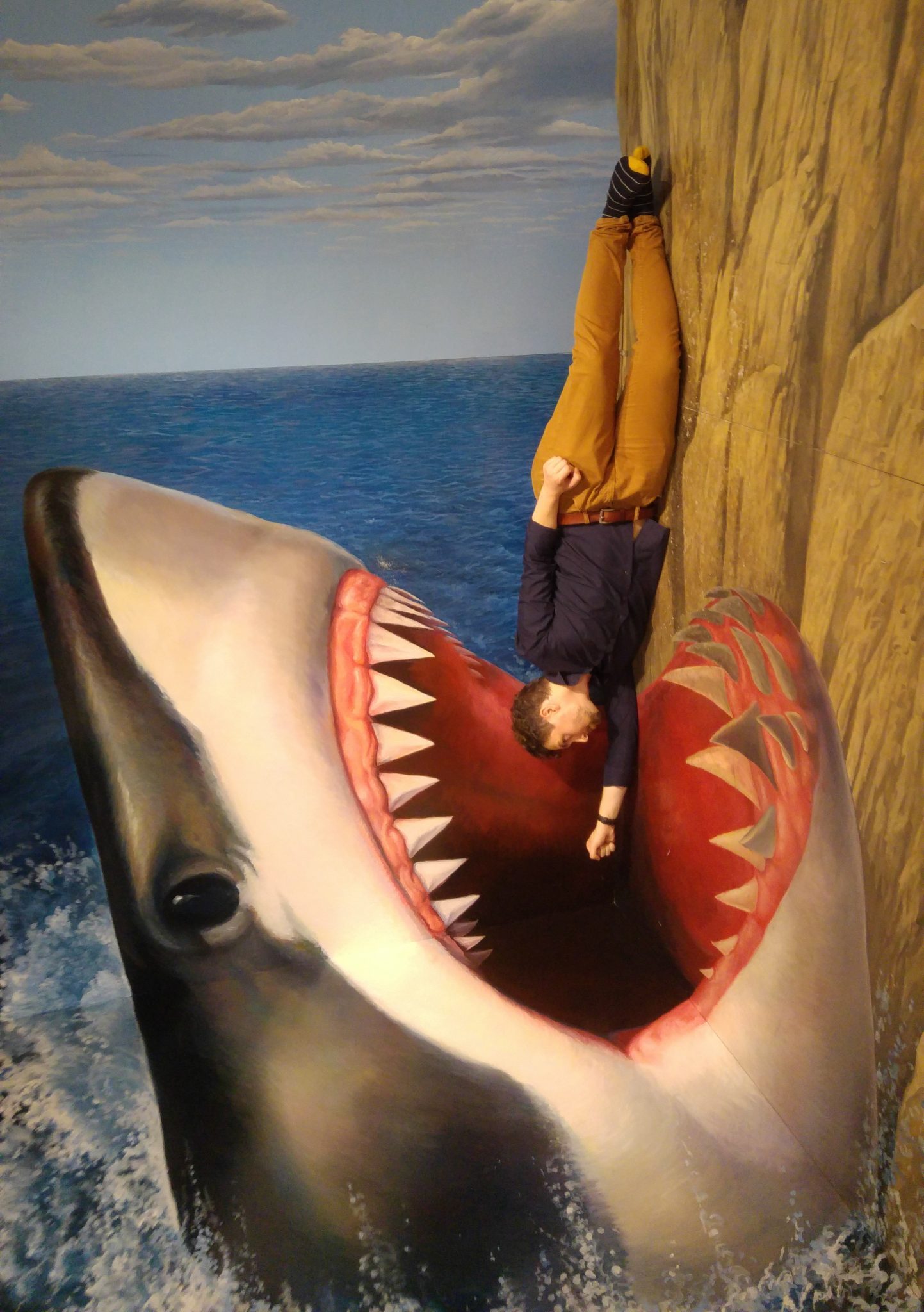 “The ninjas taught me everything shark. You do not know it but you are already endangered.” 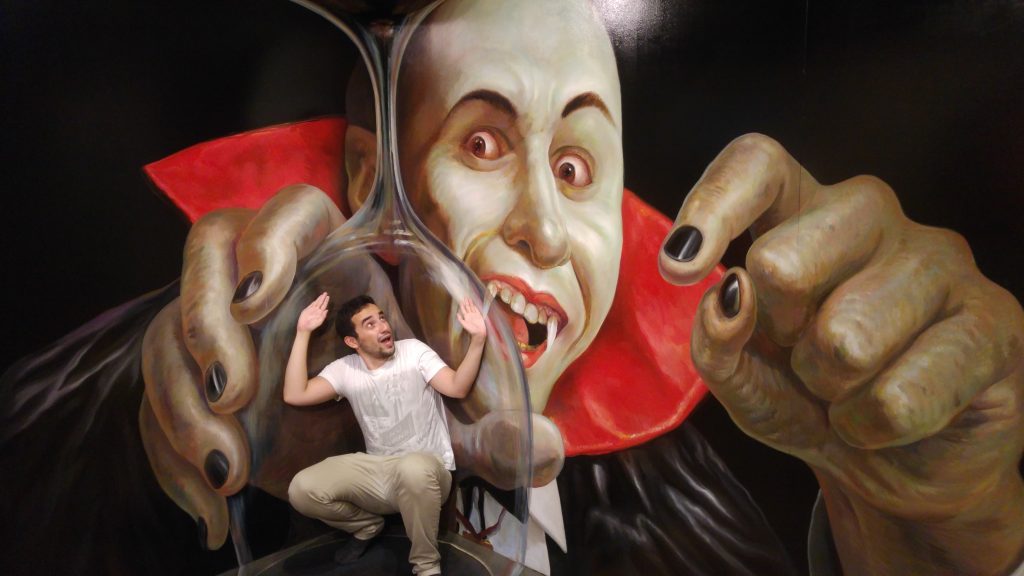 The fourth area is less dedicated to photography than the previous ones. It features quite common optical illusions. I say nothing more to not reveal you everything about it.

As in most museums, the Tokyo Trick Art Museum has its own shop. It is part of the visit, because many optical illusions are hidden there. Vendors will not hesitate to baffle you with tricks that will make you look like a moron with your friends, while they scoff about it. Tested by me and disapproved by my ego.

In addition, this area offers exclusive products on the theme of optical illusions that can make cool travel gifts for your family or friends.

We had a great time in Tokyo Trick Art Museum, even if we messed up approximately three-quarters of our photos.

The entrance cost us 900 yen per person (children pay 600 yen), for a visit that lasted just under an hour. It’s a bit expensive, but we were only two so we took photos quickly. I believe that in bigger group, photo sessions can last for hours and become merry mess. I also advise you to come at least with two friends, as some photos have only interest if two people are in the frame.

How to get there?

The Tokyo Trick Art Museum is on the fourth level of the Decks Tokyo Beach mall. It is open daily from 11 am to 21 pm.

The nearest train station is Odaiba Kaihinkouen on Yurikamome line. On this same line, the Daiba station is not far away. You can also get there easily by stopping at the Tokyo Teleport Station on the Rinkai line