Otsukaresama: an unavoidable expression in Japanese

Otsukaresama: an unavoidable expression in Japanese

You work in Japan and you hear all day long “Otsukaresama deshita” without understanding what this Japanese expression means? Read this article and you will know all the secrets of this magic formula.

What is the meaning of Otsukaresama deshita?

This expression means “Good job” or “Thank you for your work”. It is used in many contexts that we will see later in this article.

If we cut this sentence word by word we get:

We can therefore literally translate this expression by “We are tired”. A phrase you would never dare to say in public at your workplace. Well, the Japanese say it all the time! Contrary to what one might think, it does not imply anything negative. Japanese workers use this expression to encourage themselves and express their gratitude among colleagues.

When should you say “Otsukaresama desu”?

When you arrive at your workplace

It is quite rare to hear employees of a Japanese company say “Hello” in the morning. Indeed, the morning greeting and polite formulas such as “How are you?” are almost always replaced by “Otsukaresama desu”.

During your working day

Usually, everyone say “Otsukaresama desu” at the end of a meeting, in order to thank everyone for their presence. This also works when one of your colleagues comes back from an outside meeting. In this case you have to tell each other “Otsukaresama desu”.

These two situations are just two examples among many. You can say “Otsukaresama” to a colleague you meet in front of the coffee machine or in the restrooms.

You can also say “Otsukaresama desu” when you finish your work day. In this situation it is also possible to say “Osaki ni shitsurei shimasu”. In any case, your colleagues remaining in the office will have to answer you “Otsukaresama deshita”.

You will also be able to express your gratitude for the work done by your colleagues during Nomikai, these ritual coworkers pub crawls. “Otsukaresama” is an integral part of the Nommunication, the language used during drinking parties. 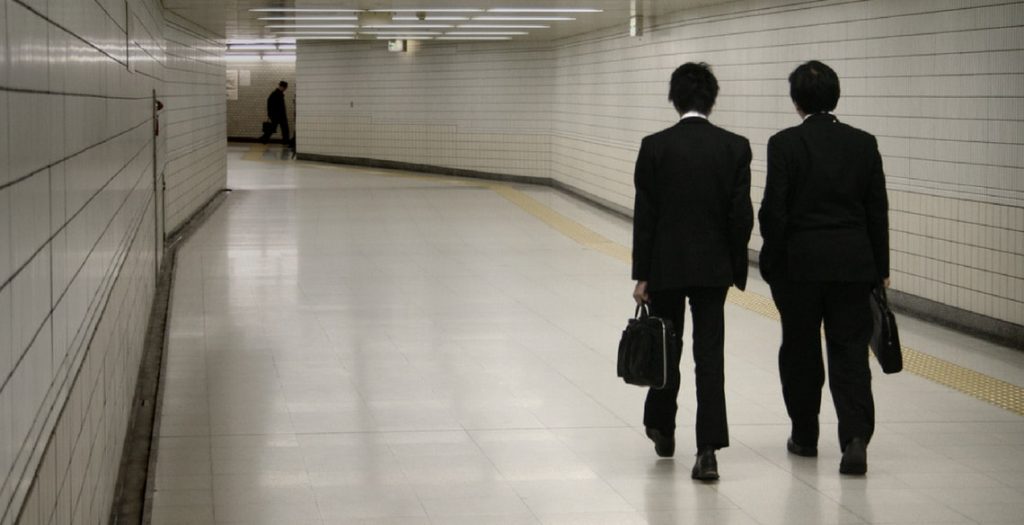 In other (totally random) situations

It is not forbidden to use “Otsukaresama” outside of your working environment. For example, it is always nice to say this expression to a friend who joins you after his work day. Even if you are not working for the same company.

In principle, you can tell everyone who has just done hard work. Even if they were not paid for it. Like these everyday situations:

Why the Japanese say “good work” all day long?

When I started working in Japan, I was really surprised to hear this phrase dozens of times a day. Indeed, before I arrived in Tokyo I had worked only in Europe, and it is quite rare to hear colleagues congratulate themselves with expressions such as “Nice work” or “Thank you for your job”. Yet, Western companies are known to be more friendly and less stringent than Japanese companies.

So it was really hard for me to imagine that workers encourage themselves all day long in a country like Japan. A country that is famous for its many rules and its coldness in the world of work.

But with hindsight I understood why the Japanese workers attach as much importance to the magic formula “Otsukaresama deshita”. If there are two things that are really emphasized in Japanese culture it is work and community. These two concepts are honored by the expression “Otsukaresama”. It is for this reason that this phrase is so important in the Japanese world of labor. By pronouncing it you value the work of each member of a well defined community: your company. You also give the impression that everyone plays an active role in the company.

This expression has a meaning similar to “Otsukaresama deshita”. However, it is more often used by hierarchical superiors towards their subordinates. “Gokurosama deshita” is a perfect example of the importance of hierarchy in the world of work, and more generally in society, in Japan.

Do not forget that if your boss says “Gokurosama desu” you will have to answer him in return “Otsukaresama desu”, and not “Gokurosama desu”. Otherwise, you could destroy his oversized ego, which would have the effect of nullifying your semi-annual bonuses as well as your requests for paid holidays.