How to order a beer in Japanese

How to order a beer in Japanese

Knowing how to order a beer in Japanese is the first thing you should learn before coming to Japan. But strangely no Japanese manuals and only three poor prhasebooks address this serious issue. Let us honor this millenium beverage through this article will guide you from your first confident steps to your late night staggering gait.

This article will take the form of a seven modules formation. Upon completion of this course, you will be able to order a beer, another one, and increase your socialization skills.

The article does not really started yet, and I am sure you are already wondering why I will explain how to order a beer in Japan, and not typical Japanese spirits. Well… I will call two reasons for this choice.

Secondly, among this sea of booze, only 3% of the market is held by foreign producers. The other 97 percent are split between four major Japanese industrial groups. Japan is the seventh largest producer of beer in the world. And if you are good at math, you should conclude that the most produced alcoholic beverage in Japan is beer by far!

Now let’s begin the serious part of this article. Here are the steps that we will lead us to inflate the previous statistics:

Getting into a bar

Before ordering a beer in a bar, you must been in a bar. This is not the topic of this survival guide, since you will find western bars or izakaya (their Japanese counterparts) throughout Japan.

That’s it! You walked 200 meters, captured three Pokemon on Pokemon Go, you are there. At the moment you will walk in the door, there’s a good chance you will hear:

You can translate this expression as: “Welcome to my tavern, young Pokemon trainer.”

If the bartender or waiter did not tell you this, there is two possible scenarios: either there are too many customers, and they have something else to do. Or, the bar is empty, and you are not very welcome. However, if a customer tells you this, conclude that he is already drunk and do not pay attention to it.

Anyway you can simply answer “Hello” in Japanese.

Order your beer in Japanese

Now, you just need to do more few steps to get your refreshment. The first thing to do before running at the bar: see that no one is waiting to be served. Japanese often line up at the bar.

It is now your turn to order. Please note, we are at the focal point of this training, so stay focused. To order a basic draft beer, you simply need to say:

In this sentence, “nama bîru” means “beer” and “kudasai” has the meaning of “please”. You can just use “bîru” instead of “nama bîru” to refer to a any beer, but the bartender could have a doubt and ask which beer you want.

If you have spotted a more sophisticated beer on the drinks menu, you can replace “nama bîru” with the name of the beer of your choice:

See? It is super easy!

After that, it is possible that the bartender asks the size of your glass. Here is the vocabulary that will allow you to answer this question:

Other sizes do not deserve to exist! 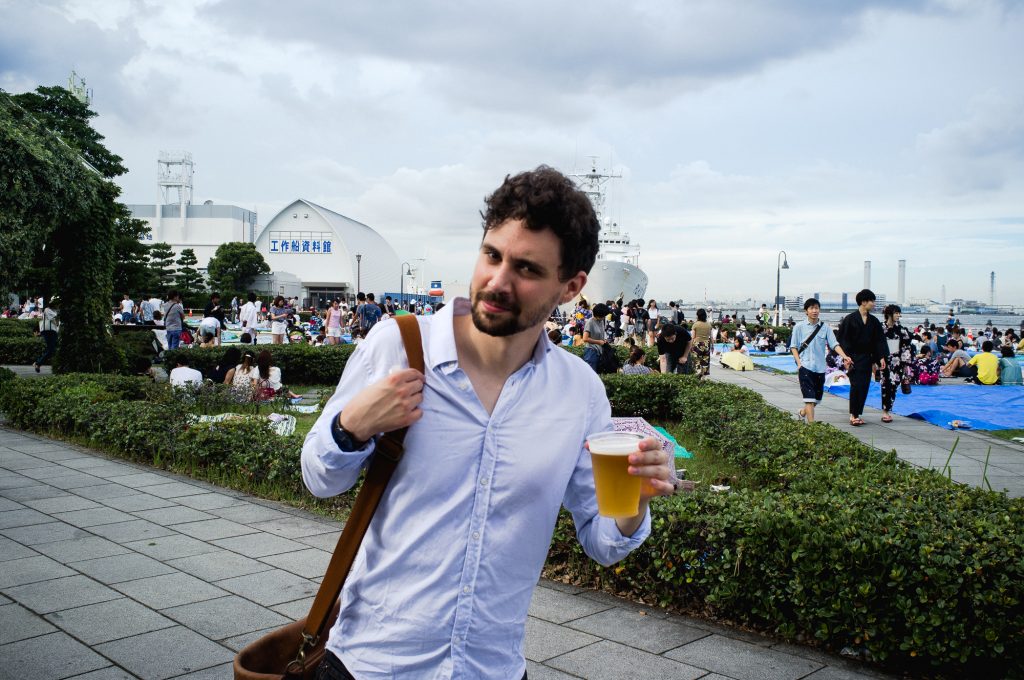 You can also order several beers in Japanese

It is possible that you will have to order more beers at a time. Because you are with friends, or you want to look like a super rich guy and want to buy a “nama bîru” for everyone in the bar.

Well, it is a little more complicated. In the sentence we have seen, we did not need to express the number of drinks. Indeed, the fact of not expressing it implies that you just want one glass. If you want several beers, you will have to add a number to your sentence.

Except that in Japanese you need to use specific numbers to count liquid in containers. The Japanese are psychopaths. You do not know it? Forget, the classic “ichi”, “ni”, “san”… Anyway, they never use them.

To count glasses you should use:

Purists will say that the terms “hitotsu”, “futatsu”, “mitsu” used to count any objects are increasingly used to define numbers of glasses. To which I would reply: “OK, continue to count random objects if you want. I count glasses. B*tch!”

Let us return to our beers. If you’d like to order three, you will need to say:

As you can see, Japanese figures come after what they count.

If you do not like beer you can order anything else 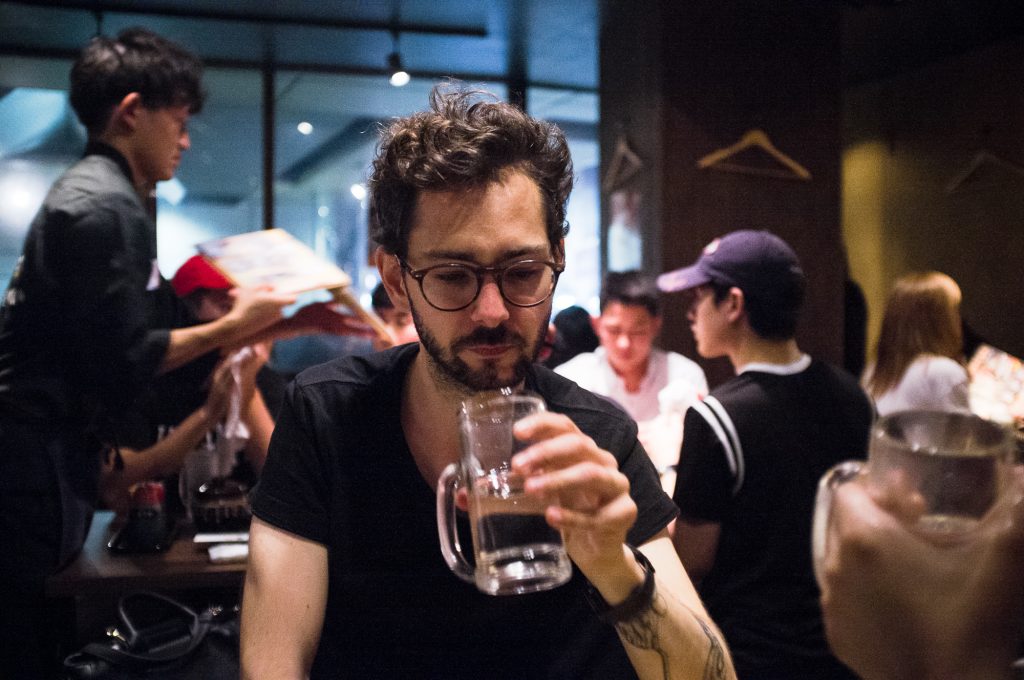 “This thing is not a beer… I think.” Bastien, thoughtful.

OK, maybe I am way too focusing on beer. I admit it! Japan is not a dictatorship (ostensibly at least). You can order other alcoholic and soft beverages. Here is a list of the most common drink names in Japan:

As you can see, except for the typical Japanese liquor, spirits names are taken from the English language. This is also the case for cocktails. This makes thing much easier for foreigners!

In short, to order something other than beer, you can simply resume the sentence structures that we discussed previously and replace the word “nama bîru” with the beverage of your choice. For example, if you want a glass of white wine, you just have to say:

Now that you have your decoction, let’s drink it! Nooo… Wait!

A few centimeters more, and your mouth would get in contact with your beverage. Your friends would never have forgiven you. They would have demanded that you do seppuku with a shard of Asahi Ichiban to wash the honor of your lineage!

As in the West, the Japanese toast: 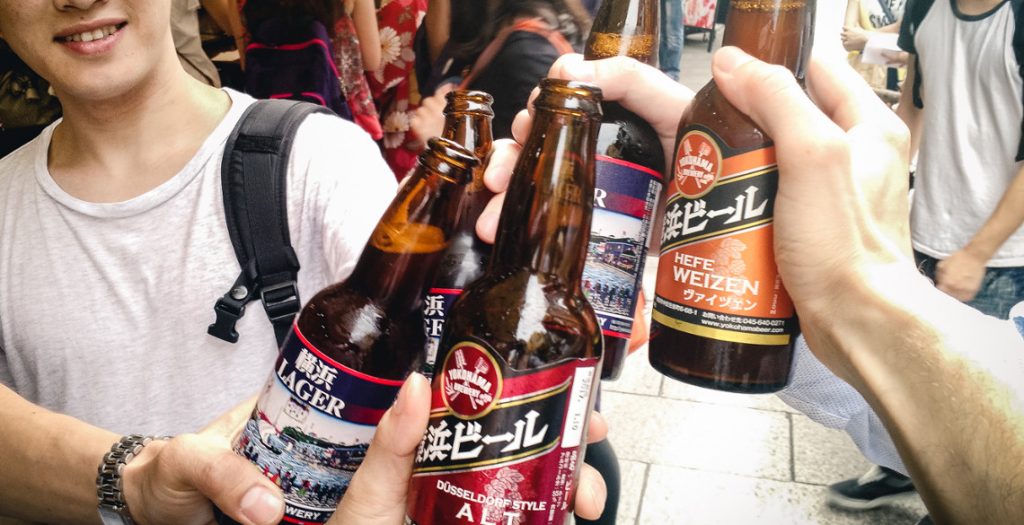 Now that you have finished your beer, mother nature starts to call you. You would like to take another drink, but it would put you in an even more difficult situation. What to do? Go to the next page to continue this training!