Nagoya Castle: the dwelling of the Owari Tokugawa

Nagoya Castle: the dwelling of the Owari Tokugawa

Nagoya Castle is the main attraction of the Aichi prefecture capital. A must-see full of History in a city shunned by tourists.

Many foreign tourists do not bother to stop at Nagoya. It’s a shame. The fourth largest city in Japan has many things to show to visitors, such as its famous castle.

The main monument of the city contains most of the symbols of Nagoya and Aichi Prefecture. In addition, this defensive structure is also steeped in history. Indeed, visiting Nagoya Castle is an attempt to understand the whole history of the city, which was built around this building.

The History of Nagoya Castle

In 1525, the Imagawa clan built the first castle on this site. In 1532, the Oda clan took it but abandoned thereafter.

It was only in 1610 that Tokugawa Ieyasu ordered the construction of a new castle on the site of the present city of Nagoya. This is also by this decision that the city was born. Thus, it became the new Owari province capital city. 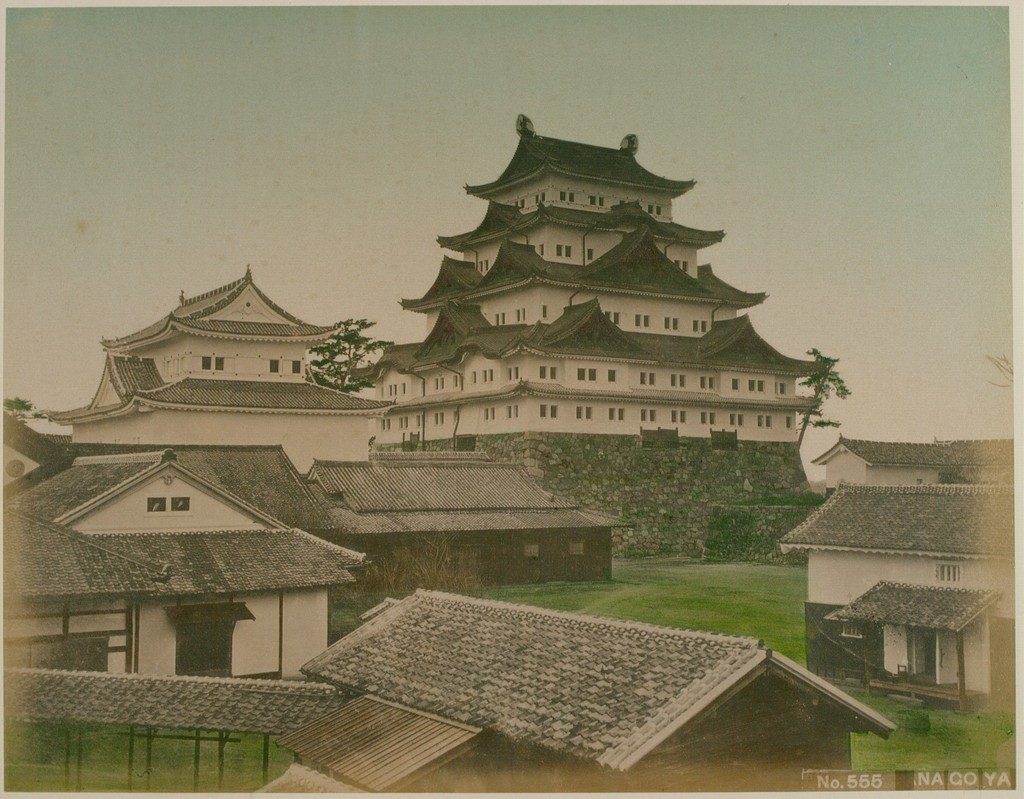 A photograph of Nagoya Castle in 1880 by Tamamura Kozaburo.

During the Edo era, under the reign of a younger branch of the Tokugawa family, Nagoya City became one of the main economic centers of Japan. This was made possible thanks to its position at the intersection of the Tokaido and Nakasendo routes: the two main roads that connected Edo (nowadays Tokyo) to Kyoto. 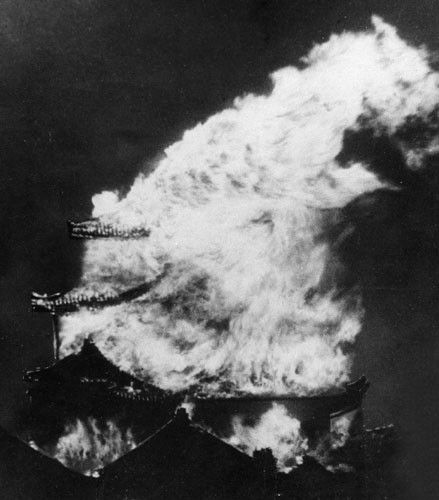 In 1930, Nagoya Castle was the first building of its kind to be recognized National Treasury. Unfortunately, the city of Nagoya and its castle were devastated during the Second World War. Indeed, it was one of the targets of US air raids because its dungeon housed a headquarters of the Japanese army.

Works to restore Nagoya Castle former glory have begun in the 50s, but different parts of the castle are still under construction. 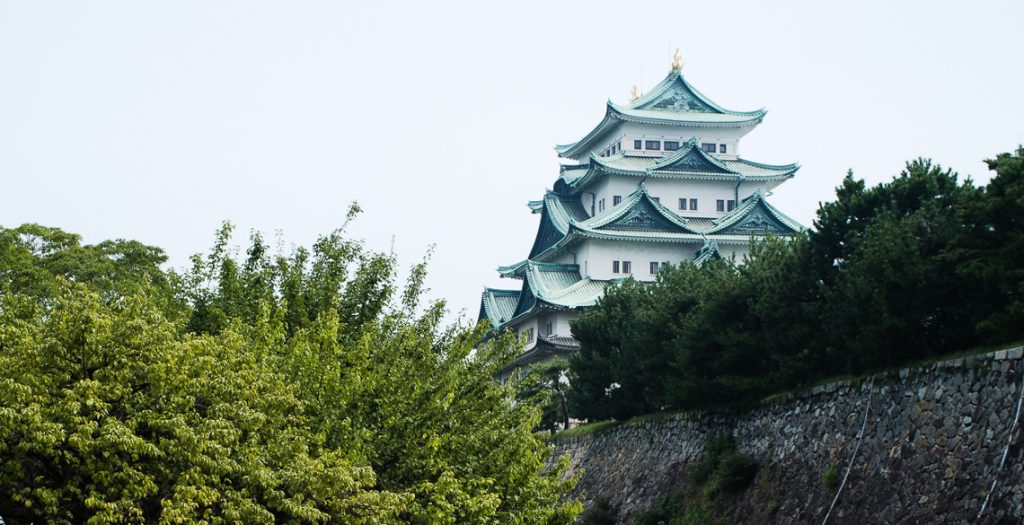 This is not necessarily a problem for people who wish to visit this place. Because visitors can see craftmen working on new pieces or admire places that have just been renovated. A rather unusual situation for a monument of this scale.

The revival of the Honmaru Palace

Honmaru Palace was completed in 1615 and it brought together the administrative offices and the residence of the Owari province lords. When he was traveling to Kyoto, the Shogun usually stopped at Nagoya and stayed in this building.

Honmaru Palace is at the beginning of the Nagoya Castle tour. The reconstruction of this building destroyed during the WWII began in 2009. The entrance of the building and some rooms were opened to the public in 2013. A second section opened in 2016, but the entire Honmaru Palace should be accessible to visitors from 2018. 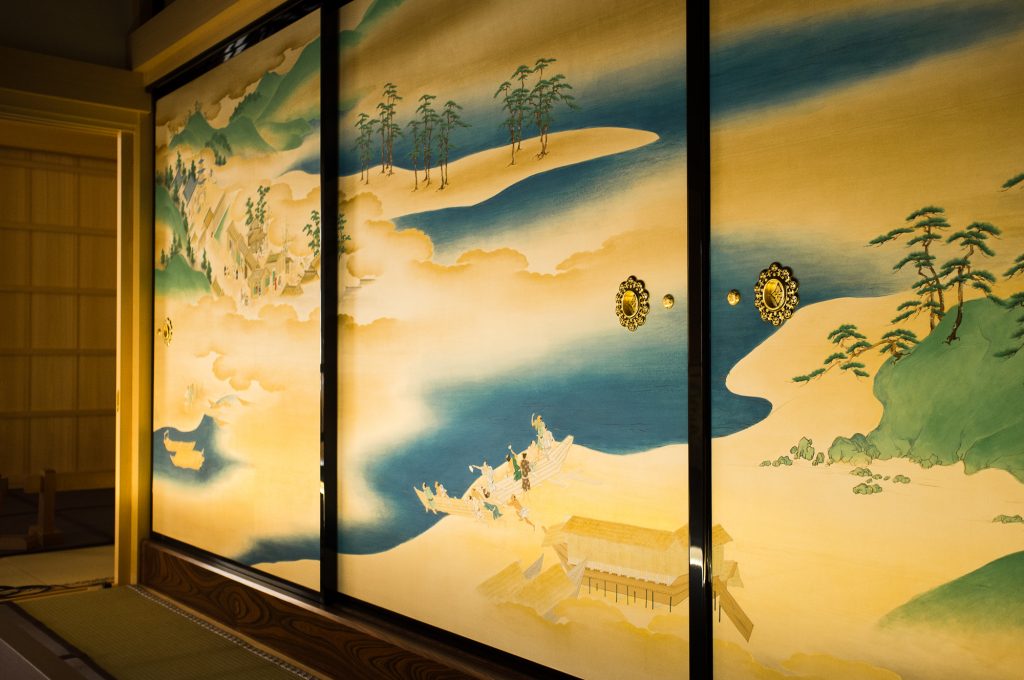 Painted panels in the Honmaru palace.

Despite this work, the Honmaru Palace remains one of the most interesting points of the visit, as it allows to admire the work of craftsmen who use archives from the Edo period (the sixteenth to the nineteenth century), but also of the early twentieth century to rebuild as faithfully as possible this historic building.

We went to Nagoya Castle in summer. so we did not take advantage of the cherry blossom and maple trees in autumn. Be aware that if you come between late March and early April you can enjoy the Hanami. And it is the same for the visitors that come to the end of October, you can view Momiji.

Otherwise, the garden is fairly mundane. You can admire the castle walls, one of them contains a huge stone. According to legend, the rock was lodged here by the famous General Kato Kiyomasa. To honor this achievement, a statue of him is in the gardens.

Nagoya Castle and its museum 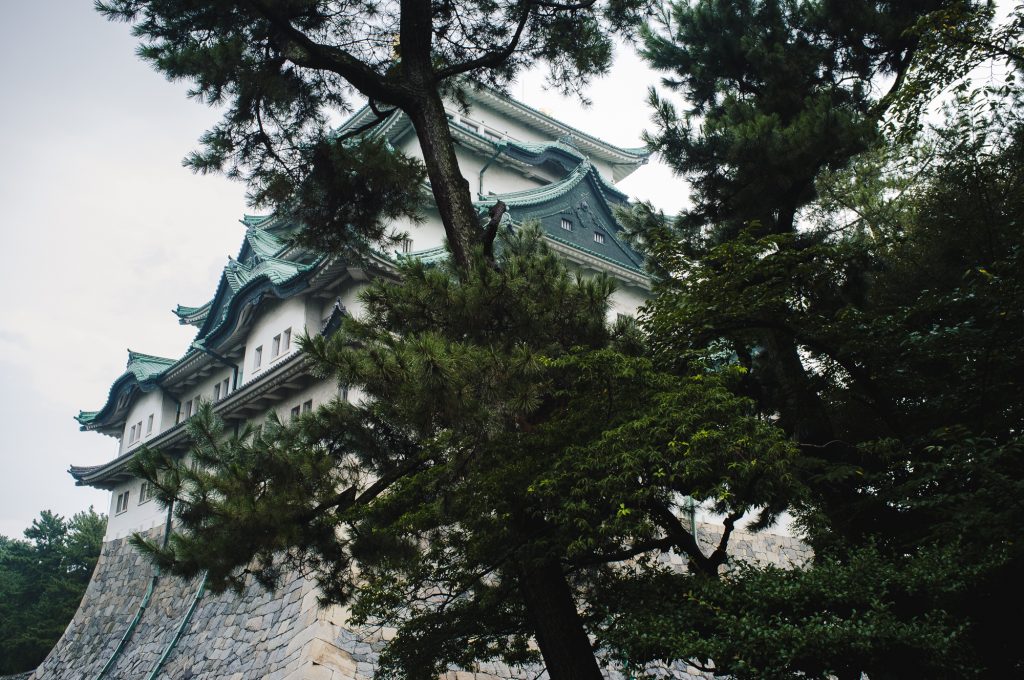 The keep behind a tree.

After this short tour in the castle gardens, you will be in front of the dungeon. This building was one of the first to be rebuilt after the 1945 bombing. Except that the people in charge of this renovation have allowed a few fantasies such as the use of concrete to raise the structure or the addition of an elevator and air conditioning.

Nagoya Castle interior hides a museum displaying items that were saved from the second world war disaster. There are also other items and models of the Edo period … And a collection of dead insects … It was cool, but unrelated to the rest. 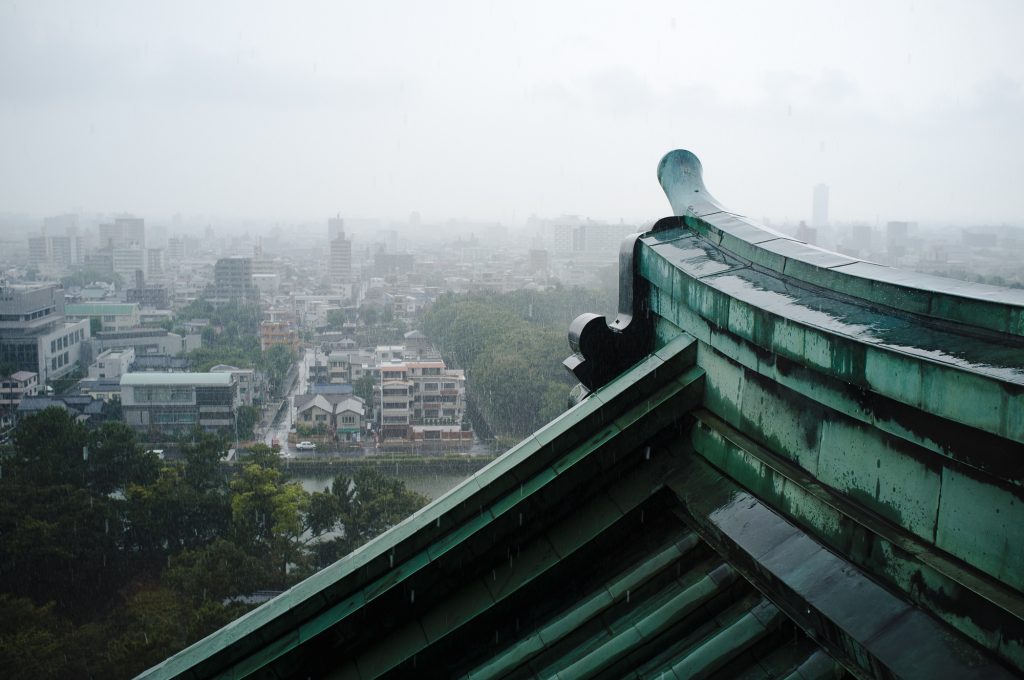 Here is the view from the top floor of the dungeon.

What we thought of Nagoya Castle

Nagoya Castle is a must for all tourists who decide to visit Nagoya. The tour lasts between an hour and an hour and a half. It is very interesting and really affordable when you consider that we are facing the biggest monument in the region.

Feel free to supply you with leaflets at the castle entrance. They are, for the most, written in English, and they perfectly explain the History of this place, but also the processes used to renovate various parts of the castle.

How to get to Nagoya Castle

Nagoya Castle is located in Naka district. Four subway lines pass near the main monument of the city. The nearest metro station is Shiyakusho, the station of the City Hall. This station is on the Meijo line, which is a circular line adopting the principle of the Yamanote Line in Tokyo. But you will also find these stations near the castle:

You’ll understand the place is easy to access. You can even consider coming on foot from Nagoya Station (35 minute walk) or Sakae (25 minutes).