Himeji Castle is one of the most beautiful Japanese castle to stand still today. Nicknamed the white heron castle after the colors of its facades, its keep is the largest wooden structure in Japan. Its authenticity and history make this monument the most visited attraction in Hyogo Prefecture.

My review about Himeji castle

Himeji Castle is a much larger fortress than the famous Osaka or Nagoya castles. But unlike its counterparts, the majestic White Heron Castle has survived the tragic events that have affected Japan, such as the Second World War or the Kobe earthquake.

The Japanese never had to rebuild it. Thus, you will not find modern fantasies in Himeji Castle, such as elevators or concrete walls that break the authentic look of this kind of building.

For these reasons, I advise you to go there if you spend several days in Kansai. Especially since Himeji is easily accessible from the cities of Kobe, Osaka and Kyoto. The JR West Shinkansen line runs through Himeji Station, which will not cost you an extra yen if you have the JR Pass. You would be wrong to deprive yourself from the largest castle in Japan.

You will begin the visit of this citadel composed of three walls crossing the Mon Ote, the main gateway to the castle. Then you will be in the third enclosure, the San-no-Maru. There, the white keep will be in front of you. If today the San-no-Maru looks like an empty place, it has not always been the case. Previously, many houses stood in this part of the castle. 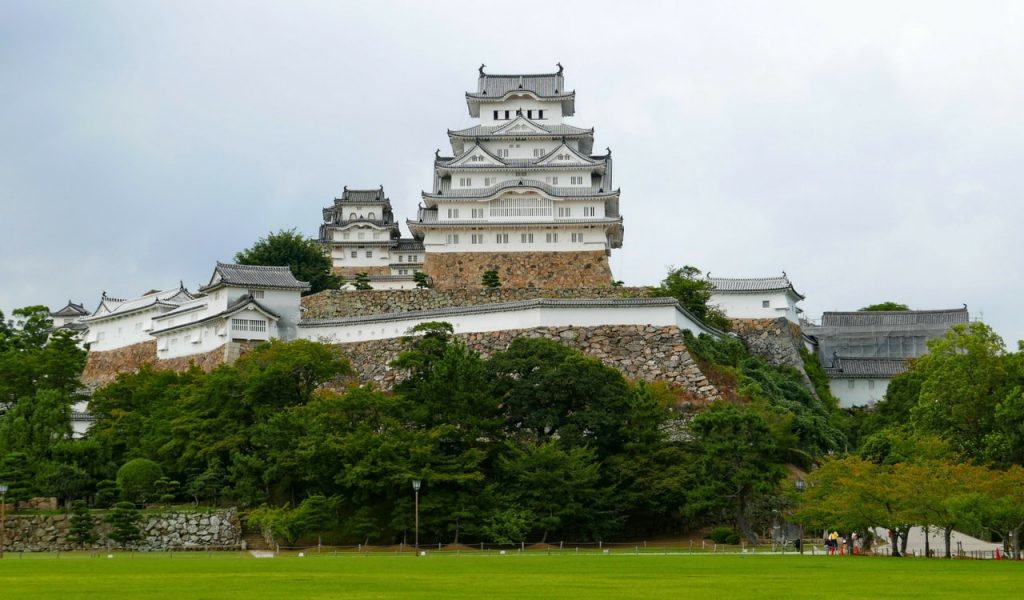 The keep of Himeji Castle seen from the third enclosure.

The ticket office is located just before the Sangoku moat that protects west and the first enclosures. From here you can take good pictures of the main tower of Himeji Castle.

After crossing the I-no-Mori and Ro-no-Mori doors, you will have the choice to go to one of the other two enclosures. At first, I advise you to turn left to go to the west wall and keep the keep for the end of the visit.

From the west enclosure, you can walk in the long corridor and the towers of the outer wall of the castle. The most interesting part of this enclosure is the Kesho Yagura Tower which houses a permanent exhibition on Princess Sen. I will discuss about here story in more detail later in this article.

After visiting the western part of the complex, you will have to retrace your steps to go to the first enclosure of the citadel, the Bizen Maru. This is where majestically stands the main keep of Himeji Castle.

From this place you will have an excellent view of the highest tower of the castle. But as you turn, you can also admire the city of Himeji. To be honest with you, the city contrasts with its castle. Modern urban structures are not very enchanting. You will be eager to go to the main keep gates. 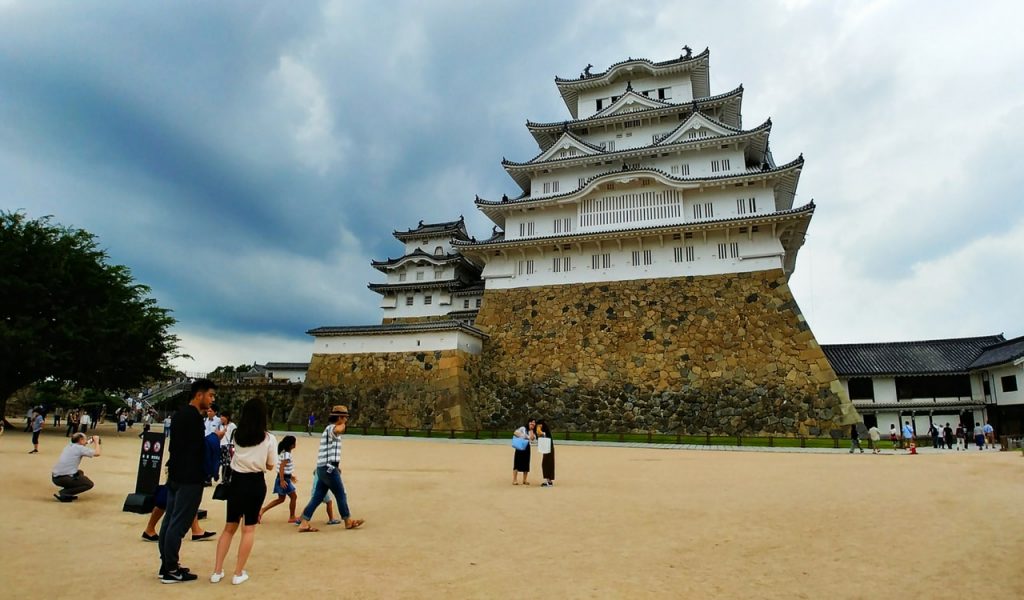 Here, we can see the immensity of the white heron keep.

The main keep of Himeji Castle is five storeys high. This is Japan’s largest wooden structure. That is why the keep is the part that all tourists want to visit. It is possible to climb to the top of this monumental tower by taking wooden stairs.

Despite the fact that the castle never faced battles, the main keep was clearly a defensive structure to be used as a last resort. The architecture of the building is thought to withstand sieges. You will find hatches for throwing stones at attackers, windows to evacuate smoke from rifles and rooms offering ambush opportunities. 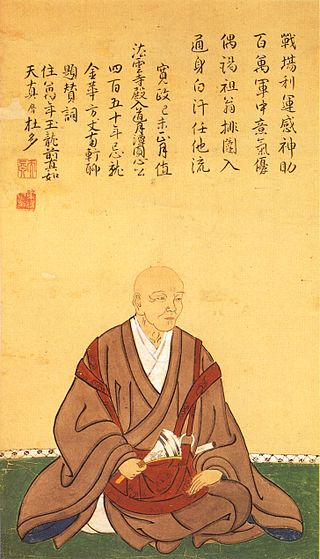 It was Akamatsu Norimura, lord of Harima province, who began the construction of a fort on Himeyama Hill in 1333. This project will be completed only thirteen years later.

But the structure of the time has nothing to do with the castle that we know today. Many other lords helped to enlarge and strengthen this fortress that will become one of the most important citadels of feudal Japan.

In 1546, the strategist Kuroda Kanbei was born in the enclosure of the fort which will become the castle of Himeji. This Christian samurai will play an important role during the civil war that affects Japan in the sixteenth century by serving the Lord Toyotomi Hideyoshi. It is the latter who is the main actor of the reunification of the Japanese archipelago.

After taking control of the area, Hideyoshi also contributed to the expansion of the defensive structure, adding a three-storey keep, and finally gave the domain to his brother Hidenaga in 1583. He will be the squire only for two years, since it will be succeeded by Kinoshita Iesada in 1585.

In 1600, the Toyotomi family lost control of Japan to the Tokugawa in the decisive battle of Sekigahara. The new ruling family placed its pawns in all regions of Japan by providing the best areas to the families who helped them to become the new shogunal dynasty. The new shogun, Tokugawa Ieyasu, offers Himeji Castle to his son-in-law, Ikeda Terumasa.

This new lord who gives the current shape to the castle of the white heron by enlarging it again, but especially by building the seven levels keep. This tower was completed in 1609, eight years after the beginning of the works. 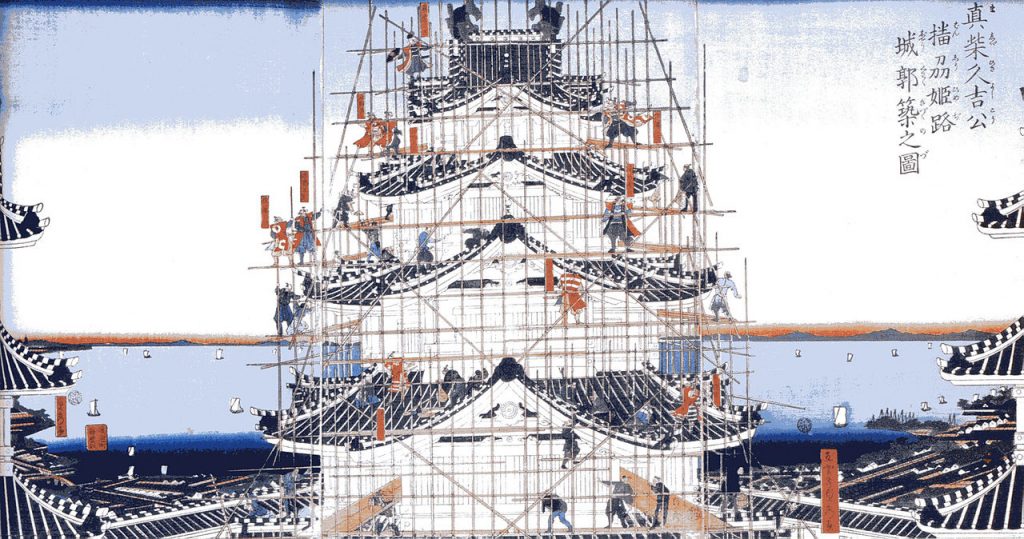 It seems that Ieyasu Tokugawa’s son was not impressed by these architectural achievements, since he took over the domain from the Ikeda family and offered it to Honda Tadamasa, another of his family’s faithful allies in 1617.

The new lord of Himeji Castle, Honda Tadamasa, is accompanied by his son Tadatoki and his daughter-in-law, Princess Sen. The latter is a very important character in the history of the castle of the white heron. Today, an entire part of the fortress is dedicated to her complex story that has inspired many Japanese playwrights over the past four centuries.

An innocent in the middle of families conflicts

During her life, Princess Sen, who is none other than the daughter of the second Tokugawa shogun, is used several times as a bargaining chip to seal alliances with important samurai families.

She is first married to Hideyoshi’s son at the age of seven to ensure that the Toyotomi family will not rebel against the Tokugawa. It will only work for a few years as her new husband commits suicide after the Osaka Castle sieges led by Princess Sen’s family. During this event, his son will be murdered by her grandfather’s troops. A murder that will put a definitive end to the Toyotomi lineage.

Sen survives this disaster. She get married again for a political purpose with Honda Tadatoki, the grandson of one of her grandfather’s senior generals. They settle in Himeji Castle in 1617, a year after their marriage. Everything seemed to be going well, since she gave birth to two children. 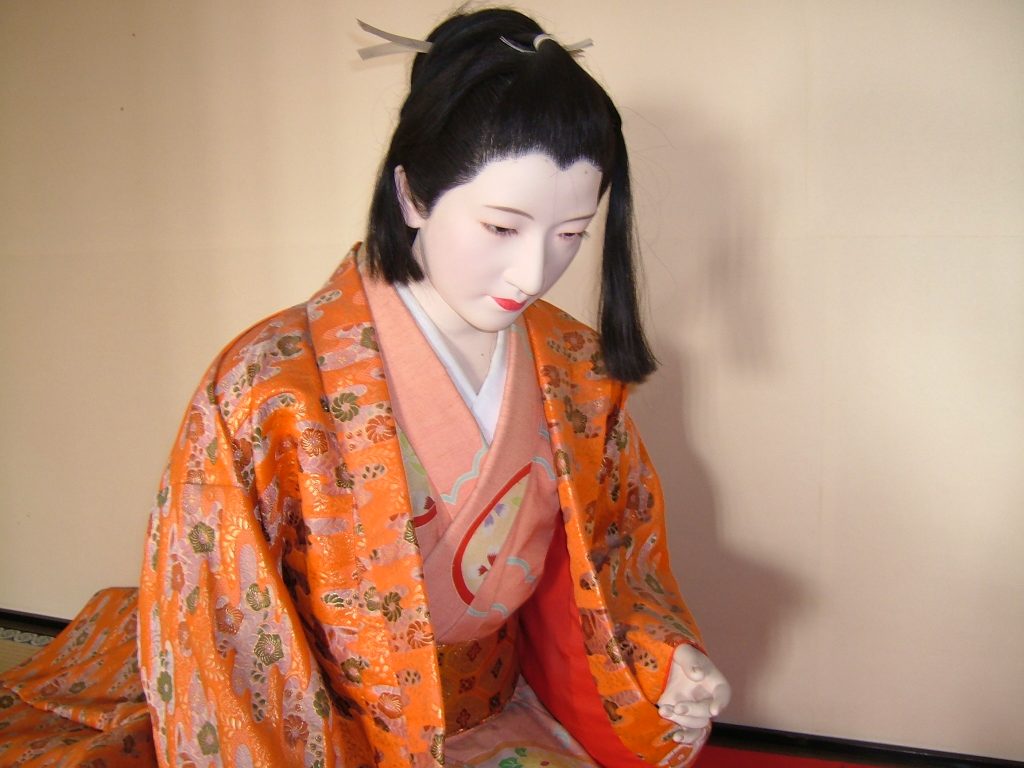 Representation of Senhime at Himeji Castle. (Photograph by Sakurai Midori)

But a succession of events will put an end to this idyll. Her son died at the age of three. He is joined by his father who succumbs to tuberculosis. Finally, the mother of Princess Sen pass away a few months later.

Upset, Sen decides to become a Buddhist nun. She makes the decision to leave Himeji Castle. In the end, she spent the rest of her life in Edo, the shogunal capital founded by her grandfather.

A major woman for Himeji

Today, Kesho Yagura, the room in which Princess Sen relaxed, and part of the western wall of Himeji Castle are dedicated to the heart-wrenching story of this noble lady.

Castle hunting during the Meiji era

With the Tokugawa shogunate, Japan lives three centuries of peace. Himeji Castle is no exception to this rule, since no major event takes place during this period.

This era of peace ends with the Meiji Restoration in 1867. The Tokugawa family is driven out of power following a civil war that restores the imperial family.

Japan is industrializing and westernising during this period. This era of great change is also accompanied by a desire to erase memories of the feudal system. Japanese castles are considered symbols of the country’s ancient political organization. It is for this reason that Emperor Meiji wishes to destroy them.

Fortunately, Himeji castle is part of a list of 57 castles to keep. While many other fortresses are purely and simply dismantled.

However, the castle of the white heron will not come out unscathed of this period, since several parts of its structure are destroyed. Barracks for the Japanese army will be built on these new spaces.

A castle at auction

In 1871, the feudal system was completely abolished. Himeji Castle is auctioned to a resident of the city for the derisory sum of 23 yen at that time, or approximately 2,000 euros.

The buyer did not want to preserve the castle. He simply wanted to demolish this historic building to take advantage of the immense land on which it extends. But the costs for the demolition of Himeji Castle were too high, which saved again the former home of the Lords of Harima.

Himeji Castle is left almost intact from the Second World War. Yet, Himeji was often subject to US air raids. A bomb had been dropped on the keep, but luckily it did not explode.

In 1995, the region was hit by a deadly earthquake. But once again, Himeji Castle is holding up. As if nothing or anyone could hurt the fortress of the white heron.

Himeji Castle was one of the first sites on the UNESCO World Heritage List. It is part of this list since December 11, 1993.

Nationally, five buildings in the complex are considered national treasures, including the main keep and several other smaller towers. In addition, the white heron castle is one of Japan’s three main castles with the Matsumoto and Kumamoto castles.

A citadel under renovation until 2015 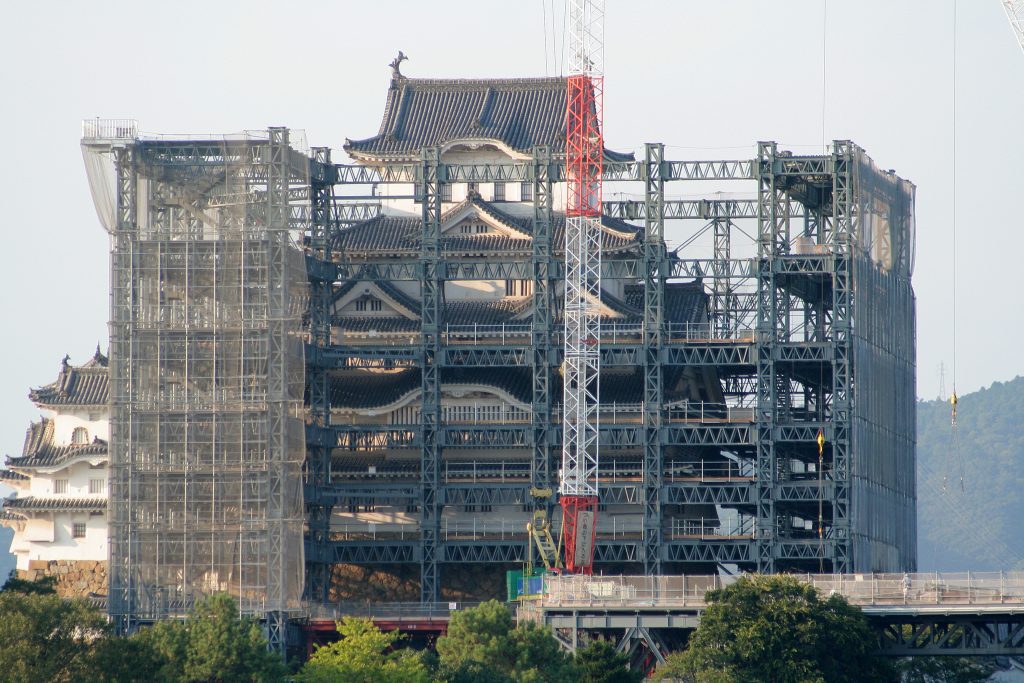 The main keep of Himeji Castle under renovation, in 2010.

In order to restore the beauty of Himeji Castle, renovations were started in October 2009. This restoration consisted mainly of replacing tiles on the roofs of the building and repainting the exterior walls. The work was completed in 2015. Tourists can now enjoy the white heron castle in its best light.

Who is the castle owner?

Himeji castle belongs to the Japanese state. However, its management is entrusted to the municipality of Himeji.

Between two and three hours. You can also visit Kokoen.

Himeji Castle is open from 9am to 5pm from September 1st to April 26th and from 9am to 6pm from April 27th to August 31st. The wickets close an hour before the closing of the castle. The doors of the castle remain closed on December 29th and 30th.

Allow two to three hours to visit all of Himeji castle, as well as the adjacent Kokoen garden.

It is strictly forbidden to have a drone on oneself within the walls of Himeji Castle. As it is also prohibited to fly this type of device in the vicinity of the monument.

You can get the attendance forecast on the official website of the castle. At certain times, the castle is a victim of its success and it is more difficult to enjoy the monument.