We just moved to Tachikawa, in a share house managed by OAKHOUSE. Find out why we chose this unknown place for tourists and this atypical accommodation.

We are talking about our project to go live in Japan for months now, and we’re finally here! We have been waiting for this impatiently, and we were even more eager to see with our own eyes the place where we will start this adventure in the Land of the Rising Sun.

Why we decided to live in a share house?

We decided to live in a share house in Japan, because it seemed to be the most comfortable and least expensive solution for the durations of our stays. Remember, Bastien stays two months in Japan, and Michael has a working holiday visa which is valid for one year.

With such periods, it was unthinkable to live in a hotel with no personality and with few liberties, a very expensive traditional rental or a Airbnb apartment.

It is not always easy to find an accommodation in Tokyo when you are a foreigner who do not speak Japanese. How will you understand your future householder who cannot speak English (nor your native language)? Fortunately, companies that manage share houses are used to accommodate foreigners and always have at least English speaking staff.

In addition, the traditional rental market is really difficult to access for those who plan to stay a few months in Japan. The strong demand for housing in the Japanese metropolis allows homeowners to make their law and enforce aberrant conditions of entry to their future tenants: you easily end up paying the equivalent of several months’ rents in fees just to have your entry ticket for the apartment you are looking for. Share houses are much more transparent about this, and much more economical too. 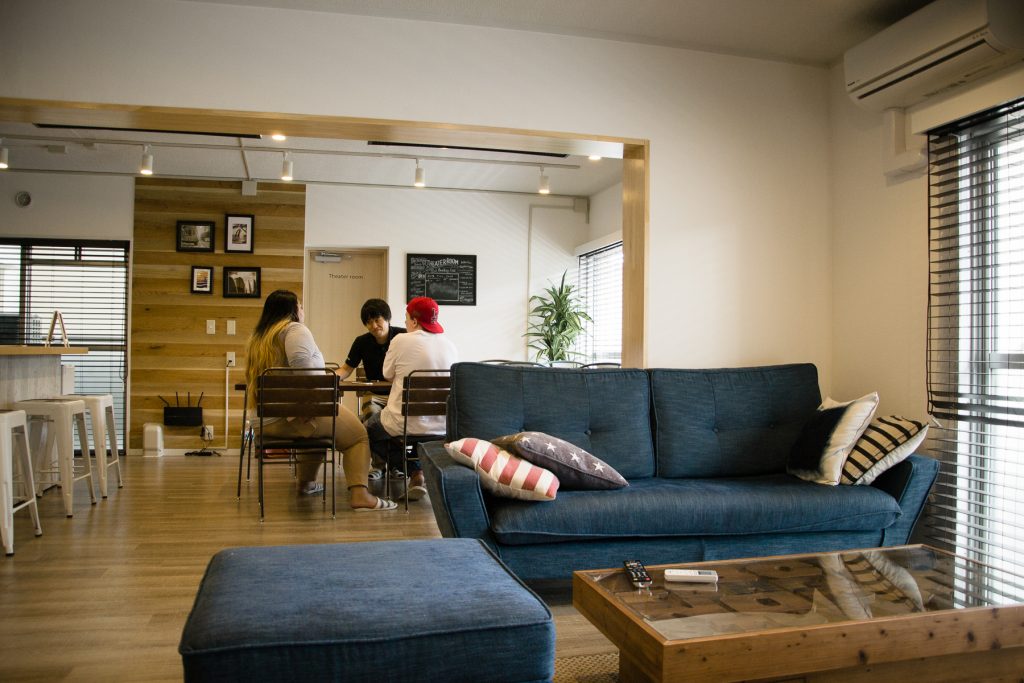 One of the two lounges of the share house. This is a common area for all residents.

Unlike a hotel, in which we would have remained splited in our rooms, we also have common areas like a living room, dining room, libraries and theater rooms. As these areas are common, they allow to meet people from very different backgrounds.

Share houses prices are significantly softer than Airbnb apartments when you plan to stay a month or more. Beside this, do not forget that share houses are managed by professional companies, while many homes are offered illegally on Airbnb.

Share houses are the perfect compromise between price, sociability and quality of life. This solution is perfect for all foreigners who wish to stay more than a month in the same city in Japan.

Beside this, let’s talk about the city in which we are living: Tachikawa.

Tachikawa city, here we are!

I guess you certainly do not know the city of Tachikawa. I would therefore briefly outline the city, so you know in which context we will evolve for several months. 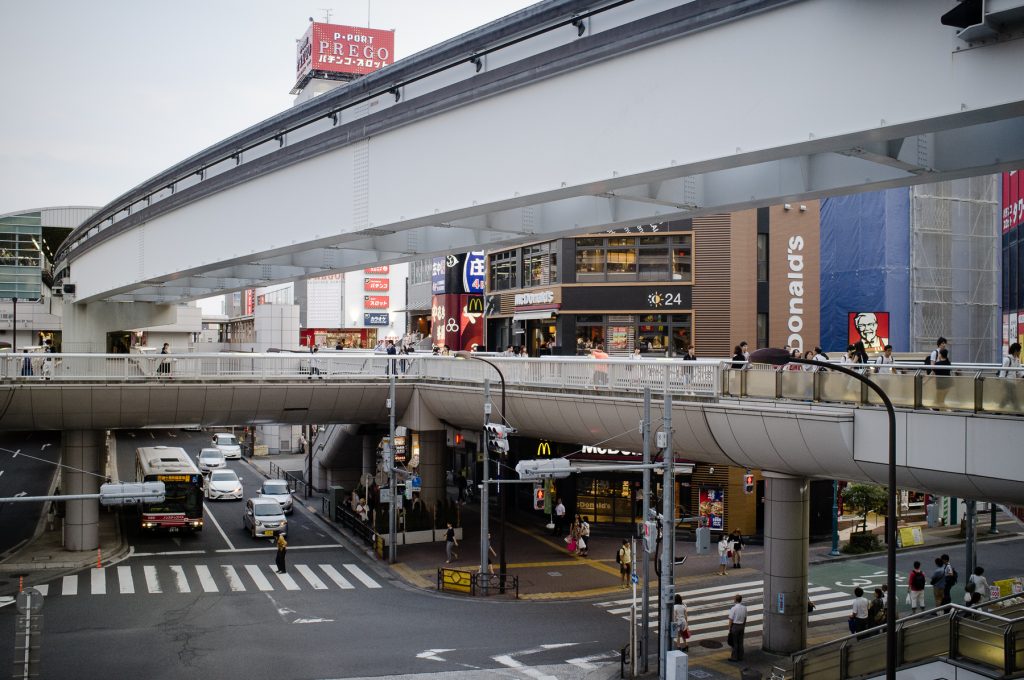 The neighbourhood of Tachikawa station.

Tachikawa is a Japanese city counting 170,000 inhabitants, located less than twenty kilometers from the “Tokyo City”. I mean by this term the 23 special wards that constitute the center of the Japanese capital. Foreign tourists rarely leave these 23 municipalities, except to go to cities like Kamakura, Yokohama, or even Kawagoe. But the biggest metropolis in the world extends far beyond these borders. We are somewhere between the Imperial Palace and Mount Takao, in a place located in the same urban unit as Shibuya, Shinjuku, Akihabara… 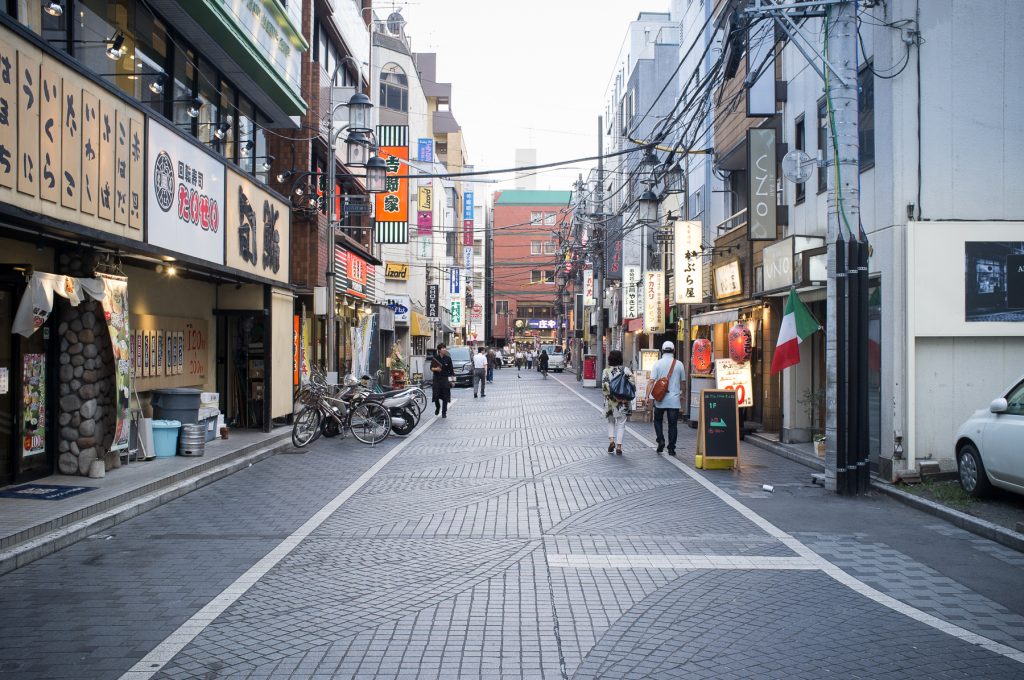 A street in Tachikawa.

Despite its location, Tachikawa is not a lifeless and boring place. This is one of the main focal points of West Tokyo. The town includes many businesses, shopping centers and entertainment venues.

So far, every time I looked for a specific shop on Google Maps, this app was able to find what I was searching for at less than a kilometer from our share house: Gran Tachikawa. 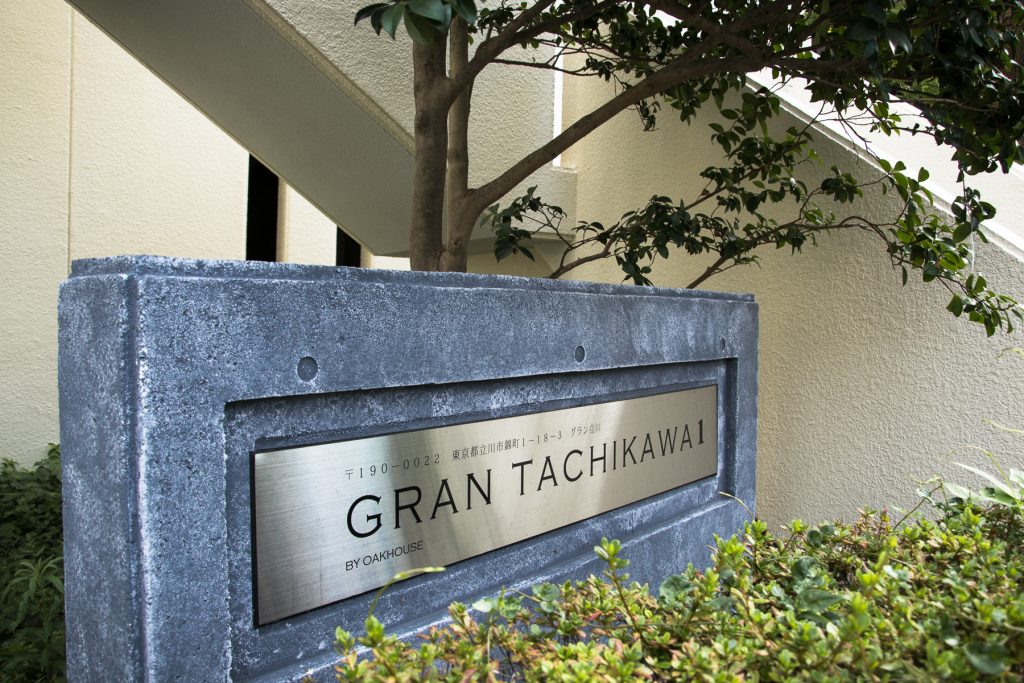 Living in Tachikawa also offers many advantages in terms of housing and quality of life. Here’s a list of what we earn living in a remote town from central Tokyo, and in a share house managed by OAKHOUSE.

The rooms are larger and there are more common areas

The share houses are deemed to offer small sized individual spaces; we mean by that “tiny rooms” with common spaces used by dozens of residents. At first glance, one can imagine to live in rooms with reduced proportions, and wait hours for his turn to go to the toilet or in the bathroom. Reality can somehow be different.

Indeed, the rooms are generally small and common areas minimized in popular places of the central districts of Tokyo. However, the more you move away from Shibuya and Shinjuku, the more you will be likely to find a share house offering much more pleasant living conditions.

The kitchen is super spacious, in addition to being fully equipped.

The Gran Tachikawa share house is far from all these clichés. Rooms are spacious: about 13 square meters, and some with private balconies. In addition, there is a bathroom, a kitchen and toilets each four bedrooms. It reinforces the spirit of flatshare and takes us away from the birdcage image in which each space is reduced to its minimum in order to optimize profits for the householder.

Obviously, the more a share house is located in a famous place, the more it will be demanded and so its prices will soar. These are basic market laws.

A piece of my room in honne mode. Note that the fridge, the cupboard and the huge French door that overlooks the balcony are not in the frame.

As we said earlier, the city of Tachikawa is still an uncharted territory for most foreigners who come to live in Tokyo for the first time. This has the effect of greatly reducing the demand, because people think that off-center location makes central Tokyo inaccessible. Nay! And that’s good for us because it allowed us to dig up a cheap housing in a place that fully meets our expectations. 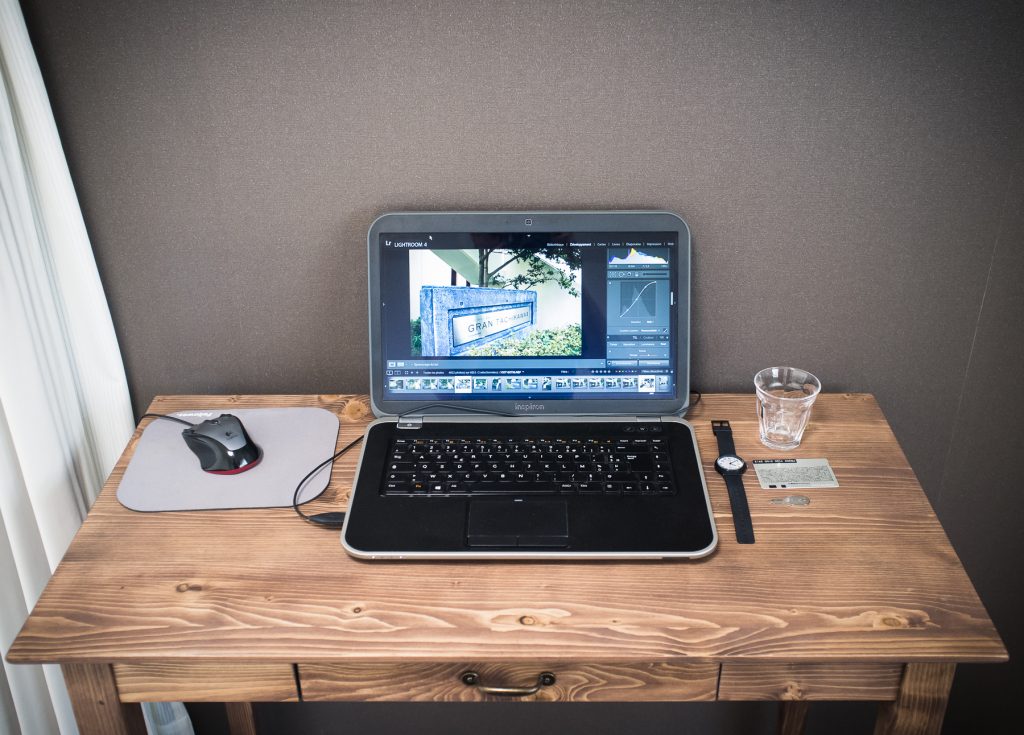 Please note that we also have a washing machine at our disposal, and for free. This is clearly not the case in every share houses.

The residence is brand-new 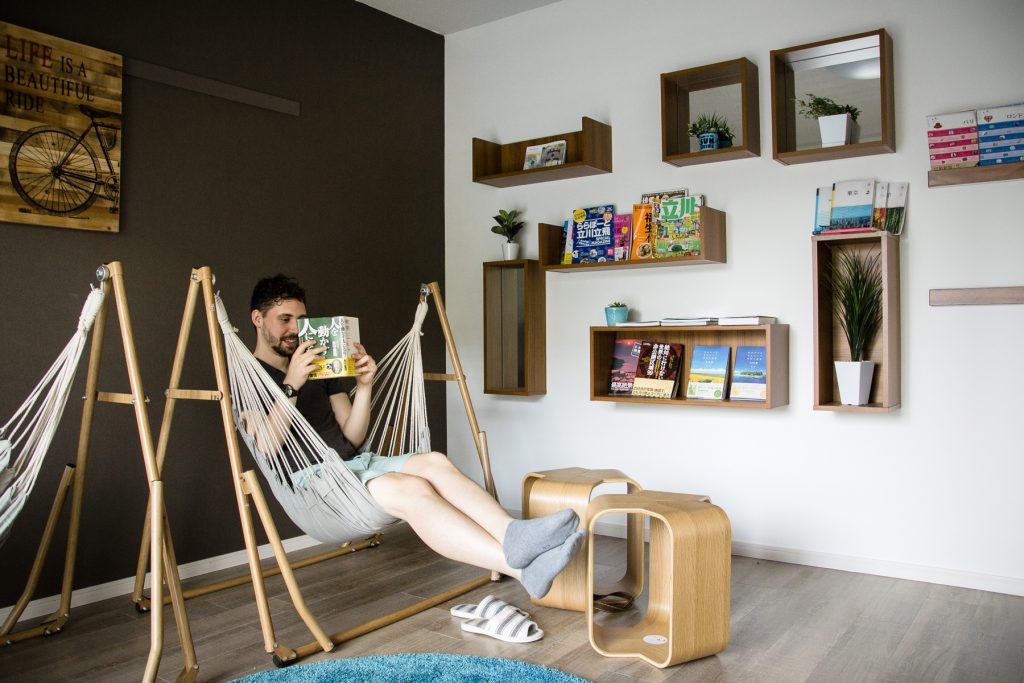 A common area dedicated to calm and serenity. Perfect for studying or reading a book.

It is a real difference when compared to most of the central Tokyo residences, that are in operation for several years and experiencing insane turn overs. Since people are often staying for only one or two months. At Gran Tachikawa, the furniture and facilities are new and the Internet connection is flawless.

We have already mentioned it earlier in this article, but our residence is inhabited by people with very different profiles. In the house we share, half of the housemates are Japanese, and the other half is made up of foreigners coming mostly from Asia, but also from Europe and Oceania. 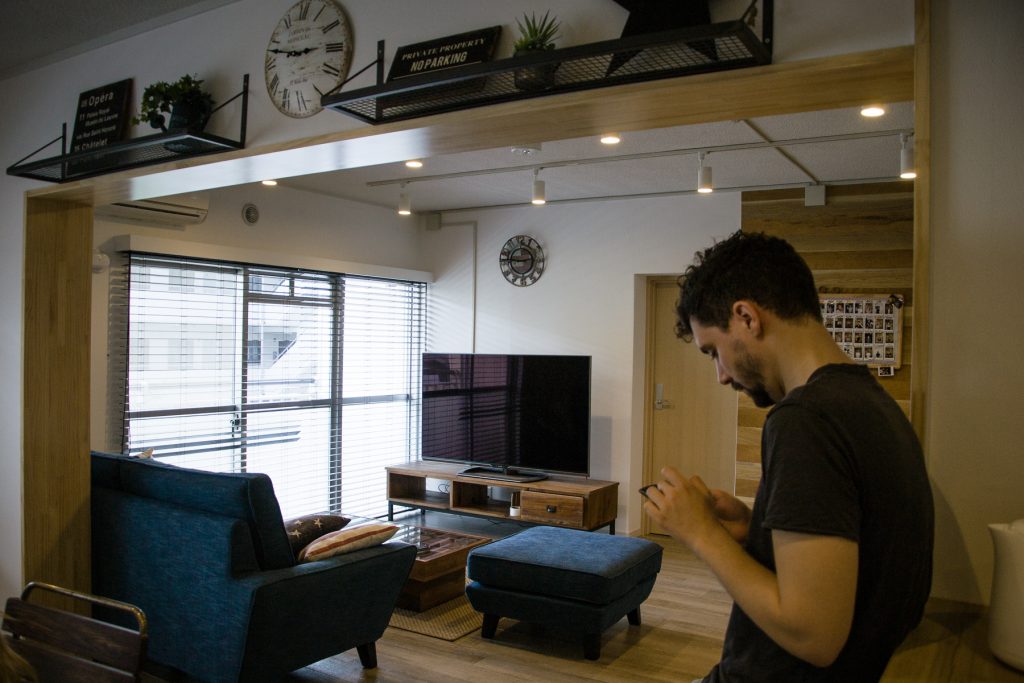 This guy could be your housemate

You will find many Westerners in most of the central Tokyo share houses. We do not want to denigrate what we are, but if we came to Japan it is also to discover different people and do not spend most of our time in groups of people we were able to frequent in Europe.

An outlying housing from central Tokyo, but not so far!

As we said earlier, we can easily imagine that a place located more than 20 kilometers from the main “interest points” of Tokyo is poorly served by public transport networks. This is absolutely wrong! 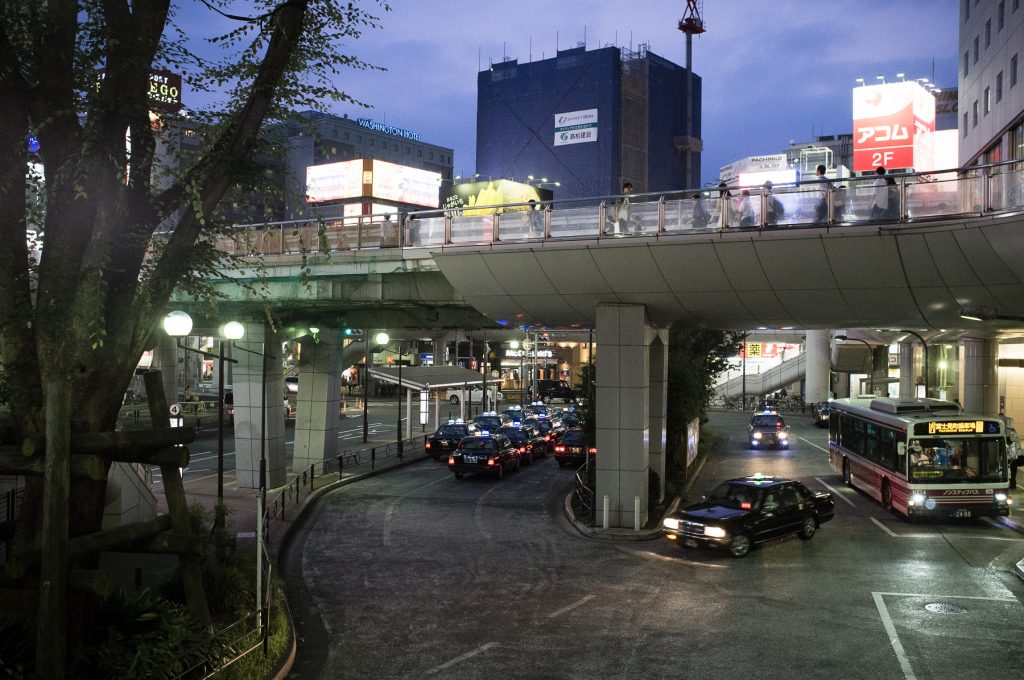 Several train lines run through the city of Tachikawa. The most famous is the Chuo Line, which also passes through Tokyo station, Shinjuku, Nakano, Koenji and so on. We must realize that with this line we only are half an hour away from the Yamanote, Tokyo’s circular subway line that passes through the main stations of the city.

The Nambu line, which goes up to Kawasaki, and Tama monorail that circles Tokyo prefecture in the west also go through Tachikawa Station.

As we mentioned earlier in this article, the share house in which we live is managed by a company specializing in this type of accommodation: OAKHOUSE. In Japan, there are many companies with several of these non-standard flatshares. Some are doing exceptional work, while others are often criticized on the web by furious former tenants. 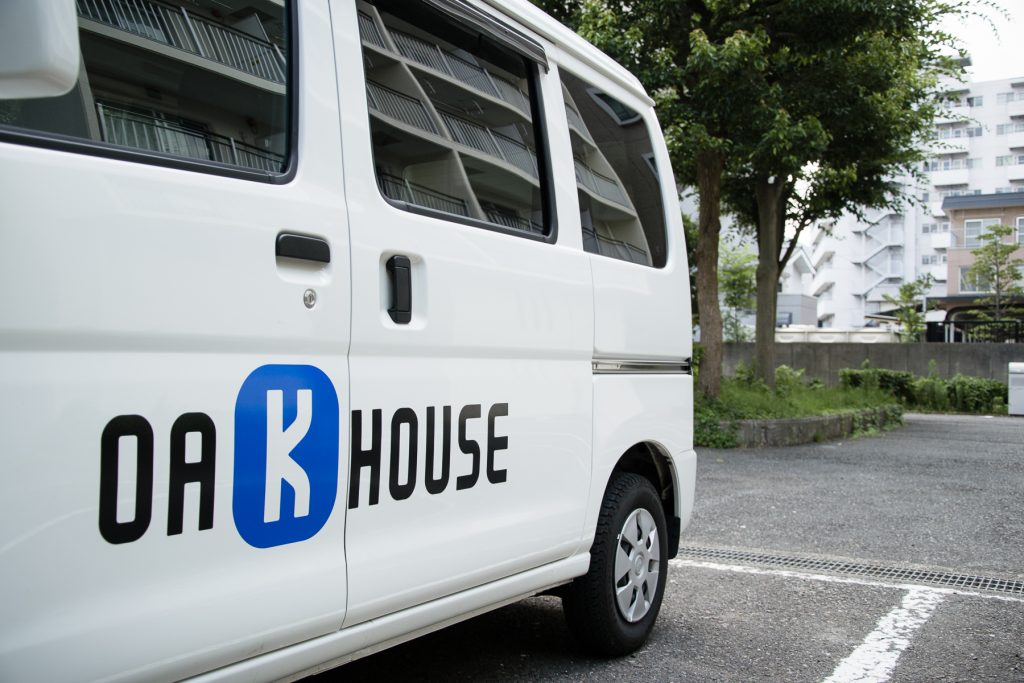 Let’s call this car the “Oakmobile”.

Obviously, if we are talking here of OAKHOUSE is that we have full confidence in this company that handles tens of share houses, but also individual apartments and hotels in the Greater Tokyo for over twenty years.

In addition, OAKHOUSE has a big advantage compared to many other companies in its sector. Unlike many other retailers, OAKHOUSE agrees to rent rooms to Japanese or permanent residents. Indeed, many managers of share houses only accept foreigners into their homes. Foreigners then end up going in circles of friends composed only of “gaijins”, which is a shame when one wishes to integrate a minimum in Japanese society or practice its Japanese.

Save on your OAKHOUSE accommodation with Nipponrama

If you’re still not convinced, know that we offer a 10,000 yen discount voucher on OAKHOUSE accommodations. You just need to complete the short form below.

[contact-form-7 id=”2531″ title=”Oakhouse voucher (English)”]
You will receive you discount coupon by email within 48 hours (because we process them manually).

In short, we are only at the beginning of our adventure, but one thing is certain is that we are very glad we chose OAKHOUSE and Tachikawa as base camp for exploring the vast megalopolis of Tokyo.